Anti-Corruption Organization of Thailand, together with the public and private sector, independent institutions and civil society, recently organized a seminar in Bangkok on “Sustainable Corruption Prevention and Suppression Reform”. The aim was to determine 5 comprehensive measures to strengthen the fight against the increasing corruption in Thailand.

The seminar was according to Mr. Pramon Sutivong, Chairman of the Anti-Corruption Organization of Thailand, an important step towards changing the Thai corruption prevention and suppression efforts to be more efficient and sustainable in five aspects. The five aspects are “Rule of Law”, “Social Participation”, “Social Morality”, “Transparency” and “Roles & Accountability”.

Anti-Corruption Organization of Thailand wants to be the focal point to drive the effort towards concrete results and sustainable implementation.

Ms. Preeda Kongpan, Manager, Chumchonthai Foundation, touched on the topic “Principles to promote public participation in anti-corruption effort” by proposing to strengthen the cooperation among the communities, local people, civil society and local businesses by setting up a “Community School” with the theme “anti-corruption” to be the center to develop the capacity of leaders in the communities.

Moreover, there were small-group discussions to listen to opinions and recommendations to execute 5 guidelines successfully. The followings are the proposals from the small group discussions.

On “Rule of Law” reform, it is proposed that the political parties and leaders should have the political will and clear policy to eliminate corruptions from the Thai society. Any policy which can lead to dishonest practices and populism policies which are vulnerable to corruption have to be scrutinized. The details, impacts and corruption risks should be examined before the implementation. Moreover, Election Commission should receive full support to reduce vote buying, equipped with the authority to impose punishment. Laws and regulations should be revised up to international standard. More importantly, the vicious bribery cycle must be stopped from both receiving and giving ends. The informants should be granted leniency.

On “Social Participation”, there was a proposal to set up a credible information center to provide information about various forms of corruptions to the general public. And the effort to create a network of small anti-corruption groups should be accelerate to fit different context. For instance, it can be categorized by regions and professions. The societal networks should work in parallel with Legislative Assembly to press every industrial sector to show zero tolerance toward corruption.

As for “Social Morality” reform, there is a proposal to implement short-term and long-term campaign to promote ethical practices both in positive/negative aspects to reorganize the society (value/wrong-right judgment/good-bad). This is the fundamental for people and the society to make decisions. In addition, the college student camp should be promoted (corruption/financial discipline/life discipline).

Regarding “Transparency” reform, the Official Information Act BE 2540 should be amended to improve the capacity of the law enforcement officers to enable them to work with independent and financial freedom. In addition, sufficient resources should be provided to law enforcement agencies to strengthen their capability.

Moreover, state enterprises should follow the same requirements regarding information disclosure with that of the listed companies on the Stock Exchange of Thailand. Budgeting and budget information must follow international standard to cover every type of budget spending such as funds. In addition to transparency, the process should also reflect other aspects such as decentralization, etc. The information should be made available to the public to make them aware of their rights and be informed of the readily available source of information about budget spending.

Ms. Kobkarn Wattanavrangkul, a member of Committee, Anti-Corruption Organization of Thailand, suggested during her speech under the theme “Campaign to promote ethical practice and righteousness” that the anti-corruption agencies and related networks should be united. At the same time, a curriculum to instill the consciousness among the youth leaders in college is in the process. The organization will also seek cooperation from Thai Chamber of commerce, Thai Bankers’ Association and other agencies to pay special attention to new graduates who have been actively participating in the anti-corruption campaign when they were students in their consideration to recruit new staff.

Dr. Kanokkarn Anukaensai, Director, Center for Philanthropy and Civil Society, National Institute of Development Administration (NIDA), spoke on the topic “Importance and guidelines to promote transparency” by explaining that transparency is a tool to reduce risk and reduce the chance for corruption. And the key element of the anti-corruption effort is to disclose the information such as the implementation of the government’s policy, the procurement, the budget details and the budgeting process as well as the information regarding the decisions which involves legal jurisdiction to supervise and approve the projects, etc.

Ms. Elodie Beth, Regional Anti-Corruption Advisor for Asia Pacific (UNDP), said during the segment entitled “International guidelines to combat corruption” that, “UNDP has a role in supporting the effort to fight corruption in Thailand by setting up a youth network called “Thai Youth Anti-Corruption Network” to instill the desirable attitude among the young people so that they will not tolerate dishonest practices. UNDP has also attached the importance on producing guidelines to assess corruption risks in procurement process.” 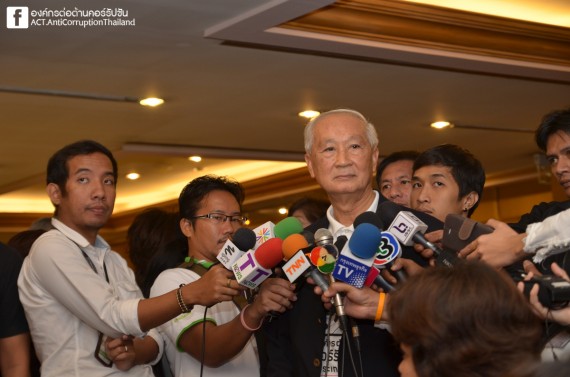 Anti-Corruption Organization of Thailand (ACT) is founded by agencies and organizations in bother private and state sectors. Through prevention, awareness raising and exposition, Its mission is to combat corruptions in Thailand.