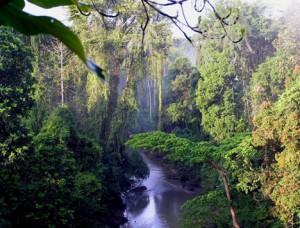 Reducing Emissions from Deforestation and Forest Degradation, known as REDD+, is a UN-designed program to ensure that it becomes more profitable for developing countries to leave their rainforests intact, rather than chopping down forests and selling the wood. As part of the program, rich countries are expected to pay forested nations to preserve their trees.

The new REDD+ Agency seeks emissions reductions by preventing deforestation and forest degradation, including in peatlands, and to ensure that these efforts are properly managed.

The REDD Agency is crucial to help realize the governments commitment to the reduction of CO2 emissions in Indonesia by 26% by 2020, and by 40% with international support. The commitment was announced by President Yudhoyono in October 2009.

The Government of Norway welcomed the Indonesian commitment and agreed to sign a Letter of Intent (LoI) with Indonesia on May 26, 2010. Norway has pledged to provide assistance worth US$1 billion to Indonesia, based upon verified emissions reductions as part of the REDD+ plan.

The Head of the REDD+ Management Agency is answerable directly to the President, and his responsibilities include assisting the President in all aspects of implementing REDD+ policies in Indonesia.

“It is important and timely for the REDD+ Agency to immediately move forward at full speed for the sake of Indonesia and the entire earth,” said Heru Prasetyo, who previously acted as secretary and member of the REDD+ Institution Preparation Task Force (REDD+ Task Force) and Deputy I of the Presidential Working Unit for the Supervision and Management of Development (UKP4).

Preparations to establish the REDD+ Agency involved at least 18 ministries and agencies, as well as 11 provincial and district governments. The operation of the REDD+ Agency is also a key component in initiating the second phase of the Letter of Intent signed by the Governments of Indonesia and Norway, the statement said

Kuntoro Mangkusubroto, the current chairman of UKP4, welcomed the appointment of the new REDD+ Agency Head. “Indonesia is ready to implement REDD+. The challenge for the new head is to encourage reform in the direction of cross- sectoral collaboration to address major challenges in reducing Indonesias greenhouse gas emissions for a sustainable economic development paradigm,” he stated.

Agus Purnomo, Special Assistant to the President on climate change, said in a statement that, “The process of establishing the new agency has been long and complex. It is hoped that it will improve the prosperity of local communities and customary societies, whose livelihoods depend upon forests.”

Welcoming the appointment of Prasetyo, the Norwegian Ministry of Climate and the Environment issued a statement saying, “This historic move by the Government of Indonesia could help save the worlds third-largest stretch of tropical rainforests.”

The ministry added that the decision is a move that kick-starts the second phase of the historic billion-dollar climate change agreement between Norway and Indonesia, one of the most aggressive efforts in the world to slash greenhouse gas emissions through the protection of natural forests in the worlds “greenbelt.”

Further, the Presidents announcement of Heru Prasetyo to head the new agency constitutes an important step forward for Indonesias forest policies, and demonstrates a commitment to a long-term approach to conserving the nations forests, according to the Norwegian government.

This announcement also advances a global deforestation agreement ironed out in the closing hours of the global climate change talks in Warsaw, Poland this past November, the statement continued.

The REDD+ breakthrough paves the way for developed countries to funnel billions of dollars to accelerate forest protection efforts in Indonesia, the Congo and other developing countries that are home to the worlds last-remaining stretches of virgin tropical forest, the Norwegian government said.

“In recognition of this unprecedented sign of the Indonesian governments intent to act to stop the illegal felling of its precious rainforests, the nation can rely on continued, stepped up financial and technical support from the Government of Norway. We have supported the countrys deforestation efforts since 2010, and we are delighted to see such positive indications of the seriousness of its continued commitment. We will remain loyal and consistent partners to Indonesias efforts”, Norways Ambassador to Indonesia, Stig Traavik, said.

The REDD+ task force had successfully piloted its work in Central Kalimantan, which now has a comprehensive map which clearly marks boundaries and land ownership, and creation of an environment information center. The success in this province will soon be followed in nine other provinces, including East Kalimantan, West Kalimantan, Jambi, Papua and West Papua.

A group, including members of the Norwegian mission, UKP4 and the United Nations Office for REDD+ Coordination in Indonesia (Unorcid), is working on better monitoring methods for the program and properly mapping the areas involved.

Ambassador Stig Traavik was quoted by the media report as saying that the former REDD+ Task Force, which has now been taken over by the REDD+ Agency, had only spent a small part of the grant that was promised, but the results had been promising.

“Of the US$1 billion dollars that we promised, between four or five percent has been spent, so 95 percent remains for the years to come. We are very happy about the creation of the agency, the moratorium and the developments in Central Kalimantan,” Traavik said.

The Norwegian funding follows the global REDD+ model, which only allows for some startup money and then additional funding is provided once results are proven. From 2010 to mid-2013, the task force survived on the $30 million initial grant. An extra $20 million came when the president announced the creation of the agency.

Being critical of the presidential regulation on the REDD+ Agency, the Civil Society Coalition to Save Indonesian Forests and Global Climate said, in a statement, “The regulation did not create any breakthrough for forest governance improvement, protection and fulfillment of human rights, and forest and peatland restoration.”

The Coalition urged the government to clarify short, medium, and long-term measures that the Agency will undertake, after conducting a comprehensive evaluation of the prior institutions work.

Separately, Avi Mahaningtyas, adviser to the Climate and Land Use Alliance, said that what mattered was that the agency could work effectively to speed conservation programs funded by foreign money.

“This country needs a breakthrough that can cut through all barriers, including the stalled bureaucracy reform. The breakthrough should come from outside the Forestry Ministry and the Environment Ministry, where all the problems are apparently coming from,” he said.