What made the Scandinavians Vikings world famous was their successful raids, and while the old Norse seafarers went outside Nordic borders and conquered most of the European land, today’s Viking, Ken Ilsø, is capturing the Asian football field. Today he plays for Singaporean Club Home United, and this year 2016 will be his third year in Asia. ScandAsia has met the Danish football player for a talk on how it is to be a one of Denmark’s finest football talents playing in the tropics. 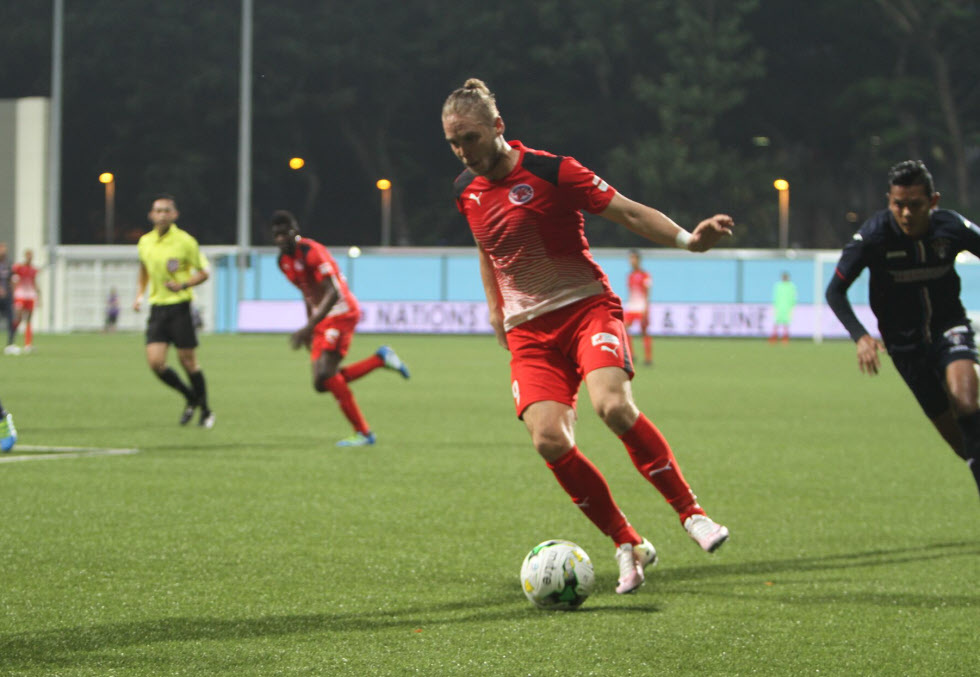 Ang moh in Asia
How do you prepare to begin a career on the other side of the world, train professionally in very hot temperature  and to interact with a whole football team only using body language? Ken Ilsø has no idea, because when Chinese super league team Guangzhou R&F in 2014 offered him a contract, he only had 36 hours to take it or leave it.

”My answer was ”bye, bye Denmark,” says Ken Ilsø, who had to travel to China immediately and begin training.

It was not first time Ken Ilsø went abroad to play for foreign football teams. In 2004, at the age of 17, Ken was signed as a youth player by Dutch side SC Heerenveen, and since then he has been playing for both Danish and German teams on highest levels. But Asia was a new territory for him and a new adventure he couldn’t wait to explore. He had been traveling in Asia before, and even if he had studied Chinese culture at Danish university level and knew a little Chinese, it didn’t help him when he faced his first culture chock: communication between his new colleagues – the first tough lesson out of many on his Eastern journey.

”I love to learn about new cultures, and I believe the best way to learn more is to engage yourself as much as possible, which you do by living with and like the locals. Admittedly; it’s not going to be easy all the way,” he says.

Besides the language barrier and a sports injures, being the ang moh (white man) on the team also means you are responsible if your team are losing or winning. Team players would not doubt that fact, no matter how good friends you were.

“What really surprised me was the fact that respect means everything. You have to assert yourself, even if it takes being a thug, to gain respect and become friends with your team players. That’s the rule.”

After a reduction in his playing time and an injury, he left the Chinese football club and went traveling in the Philippines for several months, taking a small break from football.

“I knew my time in Asia was not finished. I never really made it in China, but I was eager to give it another chance.”

Meanwhile, his traveling back and forth from Philippines and Malaysia to Denmark didn’t equal pure holiday; Ken Ilsø began studying law online “because honestly, how great it is to study a prestigious education from your own laptop?”

The flexibility suited his hunger for exploring the world, and he knew for sure he was not done with Asia. And just as great opportunities always appear out of nowhere, he was in 2015 offered a contract for Singapore’s Home United – which he happily accepted. Back in the game, lah
What he missed in China, he found in Singapore: his chance to break through in Asia. Singapore is mostly known for its jaw-dropping skyscrapers and shopping experience, or, as Ken describes Singapore himself: business and party, and not a sporty city state.

However, even if the Singaporean football culture is not as huge compared to what Ken is used to, his career has reached new heights. He has managed to extend his goal scoring streak with a total of 28 goals during 45 matches as a Home United player. He has been applauded by 80.000 people at the grandstand at the stadium, and on the side he has achieved football-related jobs such as TV expert commentator due to the UEFA European Championship 2016. Just to name a few.

“It’s not only on a professional level I have experienced a positive development, but also on the personal level. Adjusting to new work and living conditions and trying new tasks have all contributed to strengthen me. I guess my self-confidence was reborn here in Singapore, and it came back with a whole new set of competences, too. Oh, and not to forget: a more fashionable sense, too,” he laughs.

During his TV jobs he learnt how to multitask with a speaker in his earpiece and at the same time keeping focus to his viewers, while he analysed the different matches. But one of his biggest accomplishments was to learn how to work in a completely different environment – and still succeed.

“In Singapore, football is very different compared to Denmark. The sport itself is not very important, and there is not the big feeling for the national team. Even the method of playing is different, because the insider knowledge of each player and analysing the next step is non-existent. Instead, Singaporeans are more likely to follow orders given to them on the field.”

Eventually, challenges are good for self-growth. A harder challenge is the fact that his family is on the other side of the world. They love to visit him, and aside from them, what he misses most from Denmark is the “two-man-ship”.

“I am not a fan of always having to plan everything in big groups when going out. I have to admit I simply miss just calling your friend and hang out the two of you, very randomly and without hours of organising,” he laughs.

What the future will bring is still unknown. Ken Ilsø’s adventurous mind is not excluding anything. Only one thing is sure; like a true Viking came ashore after months at the sea, Ken Ilsø can return home with loads of success after his Eastern trip.