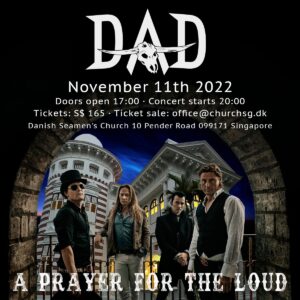 Danish well-known 1980’s rock band D.A.D will be performing at the Danish Seamen’s Church on 25 November.

As reported by the Church itself, a fresh load of tickets are now in their possession and can be purchased via emailing office@churchsg.dk whereafter the tickets will be handed over at the Christmas Bazar or by appointment the forthcoming week.

On announcing the concert in October, the Church offered guests to sign up as sponsors and invite friends or colleagues to a Meet & Greet with the band prior to the concert.

Undersigned is highly recommending getting your hands on one of the last tickets and not miss out on D.A.D. who always manage to give extraordinary stage performances.

D.A.D. – originally Disneyland After Dark before changing their name to avoid a lawsuit from the Walt Disney Company – consists of Jesper Binzer (lead vocals, guitar), Jacob Binzer (lead guitar), Stig Pedersen (bass) and Laust Sonne (drums) and made their international breakthrough in 1989 with the record “No Fuels Left For The Pilgrims” which included the single “Sleeping My Day Away”.