On 27 April Sweden’s Ambassador to Thailand His Excellency Staffan Herrström, along with Managing Director Jan Eriksson and brand representatives, including Glenn Watman, Regional Director Asean Husqvarna, inaugurated the new Bangkok office and warehouse facilities for Spica Siam / Husqvarna. Many Swedes from the expat community in Thailand, as well as other VIPs also attended the ceremony, which included speeches by H.E. the Ambassador as well as Managing Director Jan Eriksson.

The new premises – conveniently located on On Nuch road near express ways and the Bangkok ring road – prepares Spica Siam / Husqvarna well for further expansion and solves previous issues in terms of having a streamlined operation, the guests learned from Mr Eriksson.

“We’ve moved out of previous facilities, could not handle logistics in any efficient way.”

Jan Eriksson continued to explain about their growth plan.

“Aside Husqvarna we have Gardena (a Germany company but owned by Husqvarna as an extension) and we are exclusive importer for greenworks tools; supplier of environmentally efficient products. Furthermore we also operate our own Thai brand ‘Khunsuke’.

“We had a rush to get this office, and moved in early – which was good in order to get ready in time for today. The incentive in getting everything ready was that the Swedish Ambassador was coming here to officiate the opening, and he could not possibly be let down by something. So that has been a good driving force,” Jan related and told that the distribution now works exceptionally well, with things closed to 98 per cent ready.

He especially thanked his colleague, General Manager Surakom Thongthaen Na Ayuthaya for having done a fantastic job for the company: “Surakom has been the greatest contribution to the level of professionalism we have created here. He is really a valued asset in this operation.”

“Spica is synonymous with Husqvarna, as you can see from the business signing. I myself spent 35 years as an executive for Volvo Cars and that experience taught me how important branding is for value and building a business,” said Jan and continued: “Spica will always have Husqvarna first in mind and build branding for its long-term prosperity. We cannot offer the best for the cheapest; in Thailand the cheapest is often the customer’s choice. But the strength for the brand is so important for our future. If we can build desire for Husqvarna we can grow our business much more.”

Considerable amount of investment has gone in to building these facilities to Husqvarna standards to facilitate for further expansion.

Sales has so far increased, year on year, with 50 per cent in 2016, but that growth was not enough, according to Mr Eriksson.

“We must grow much faster and we have all the plans for doing that.”

Their countrywide network of 350 dealers will play a relatively small part of the expansion, where the “new kid on the block” is expansion from modern trade, such as online sales of delivery.

“We will have several outlets online, including our distribution and online sales. It’s the way that the business is going in the future; we can see it clearly in Europe and U.S and so on, where people buy online. That helps us with the advantage of the efficiency of distribution as well. So our warehouse is prepared for this new way of doing business.” H. E. Staffan Herrström was impressed to hear about the 50 per cent increase in sales and surprised that Jan Eriksson required higher growth than that.

The Ambassador furthermore thought that the premises were well planned and flawless and could not image what two remaining per cent could be. He also noted the Swedish look and feel, in the blue and yellow colours.

“Swedish industrial history is synonymous with flagship brands such as Husqvarna,” the Ambassador also reflected.

He also praised Jan Eriksson, being the very first Swede in the Thai community that he had come across since arriving to the mission Thailand last year. Jan, he portrayed, was a businessman with stature, possessing a vast network and long experience, and being involved as President of the Thai-Swedish Chamber of Commerce and on the Board of EABC. Jan had been of great help to the Ambassador when arriving to Thailand.

After the speeches the ribbon cutting followed and then a tour of the premises before the guests were served cocktails (canapes) and drinks for lunch. 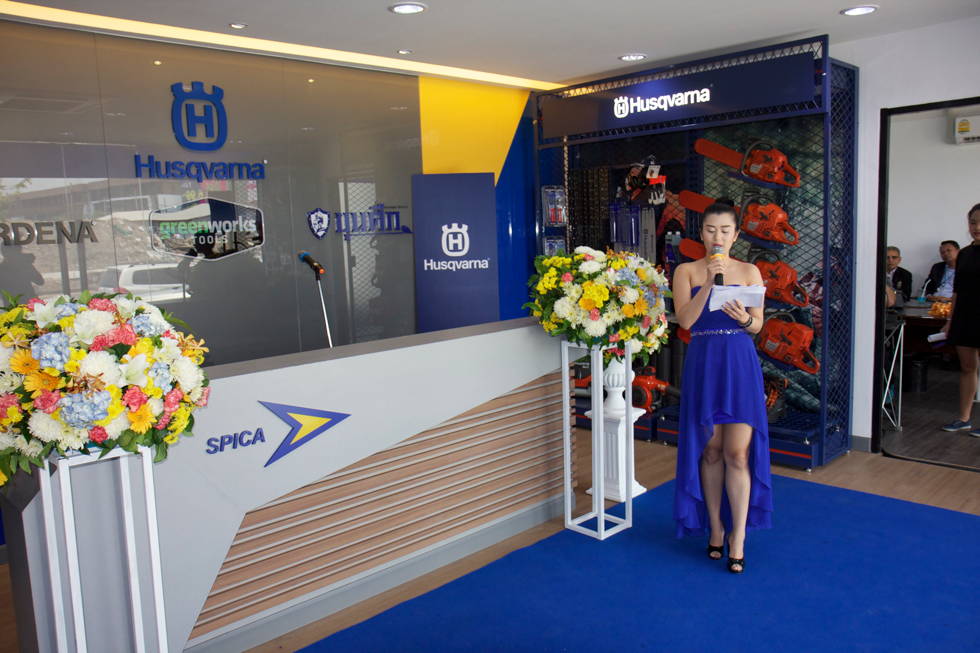