“If it doesn’t give you goose bumps, you need help. Seriously,” said Karl Johnny Hersvik, CEO of Det Norske Oljeselskap ASA (The Norwegian Company), before 60 Norwegian boys began their performance of their first public concert in Asia.

Looking around the fully seated church guests, it was indeed difficult not to spot a person not being moved by the concert.

She was one of the 850 guests to listen to the magical sounds of Nidarosdomens Boys’ Choir, when they performed in the St. Andrew’s Cathedral in Singapore on Friday 20 May 2016. “Think about how huge this is. More than 800 people are gathered here in the church on a Friday evening to listen to classical music. That is unusual, but it also shows how appreciated the Nidarosdomens Boys’ Choir is,” he says.

The attention for the concert proved the universal love for music. The boys sang in Norwegian, German, English, and even Latin, but both familiar and unknown words from the songs were all equally appreciated by the audience. St. Andrew’s Cathedral is the largest cathedral in Singapore, and its huge volume space made the voices sound clear and strong. Even outside of the church were people gathered to listen to the concert.

“It’s unbelievable. The tickets were sold out in the very beginning, and we have even made more seats available. I am so happy about how the Singaporean community are welcoming Norwegian culture,” says Rolf Jarle Brøske, Director of Communication, The Norwegian Oil Company.

With the youngest member of the choir only being 10 years old, you wonder how many nerves are build up before the performance. The choir’s conductor, Bjørn Moe, said the boys were very excited, but having nerves? No. “Backstage they have been relaxed, but eager to sing,” he said.

And as they say, practice makes perfect.

“All of these boys have been training incredibly hard to become the Nidarosdomens Boys’ Choir. They have trained to succeed,” says Karl Johnny Hersvik, CEO of The Norwegian Oil Company.

According to the boys themselves, nerves were not an issue.

Members of Boys’ Choir Peter Irgens and Save Brautaset, both 12 years old, agreed the concert had been and fantastic experience, and they were not nervous at all. “The only thing I was worried about was the heat, because usually we have to wear long pants underneath our cape uniforms, but luckily, we were allowed to wear shorts,” says Peter Irgens, member of Nidarosdomen’s Boys’ Choir. 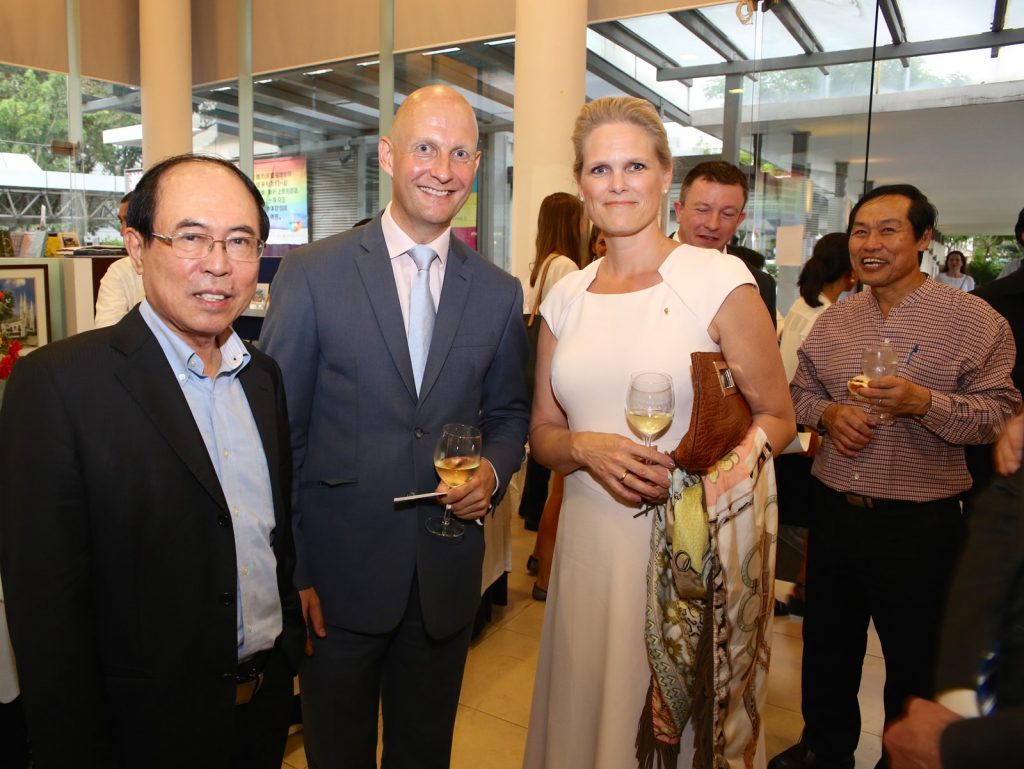 All the boys were handed beautifully handmade gifts from Singaporean C.I.T.Y. organization, as a thank you of bringing Norwegian culture into Singapore and pleasing all guests with their voices. Norwegian Ambassador in Singapore, H.E. Mr. Tormod C. Endresen, showed his gratefulness in words of having the boys’ choir in Singapore.

The 60 boys from the choir were brought from Trondheim to Singapore by Det Norske Oljeselskap ASA (The Norwegian Oil Company) as a part of the celebration of finishing the Ivar Aasen-project, and this concert in St Andrew’s Cathedral was the only public concert. The Boys’ Choir will perform on 21 May 2016 for the official Sail Away celebration of Ivar Aasen in the morning, and again to the formal dinner at Carlton Ritz in the evening. The Norwegian Oil Company wanted to host this public concert as a way of giving back to the community they have been working in for the last 3 years. Together with the musical gift, The Norwegian Oil Company donated SGD 2000 to C.I.T.Y, (Character in the Young), a community service of St. Andrew’s Cathedral, which aims to build good character in school children.

All photos are kindly borrowed from The Norwegian Oil Company.