5 September 2019 was not just any ordinary Thursday for the Norwegian Seamen’s Church in Pattaya. It was the official opening of the new church in Thappraya Road Soi 5, even though it has been used for a few months, merely a stone’s throw from the former church in Soi 7. In fact, you can see the roof of the latter from one of the higher floors on the new church. But the new building belongs to the church.

Even though the white bricks and modern building style of the new church calls resemblances to a high-class, minimalist villa, the large cross that adorns the wall opposite the entrance, leaves no doubt that one has entered a church.

It will now act as the new social and religious place, where people can get their lørdagsgrøt (Saturday porridge), join for the weekly jungle trip and of course attend the traditional Sunday service as well as other activities organized by the church.

Ørnulf Steen, the Secretary General of Norwegian Seamen’s Churches, repeated at the opening what he said in an interview the previous day:

“A building made of stone is stone dead. It is people who give life to the building.”

Bringing life by showing up is exactly what people did on this cloudy, humid day in Pattaya.

About 140 chairs had been placed in front of the altar and almost every one of them was occupied.

Glancing through the room the eye would meet a sea of black hair, blond hair, grey hair, and no hair. Regardless of hair, all had in common that they were wearing their finest shirts, dresses, pants and shoes.

Small-talking filled the church while men with cameras were preparing to capture the atmosphere and events of the day to come.

True to Thailand, the opening started a few minutes past the scheduled 12pm.

Norwegian, Swedish, Danish and Thai voices died out and it soon went completely silent apart from a few phones beeping or ringing before the owners managed to turn them off. A child made some noise before being shushed.

Being the Secretary General of all Norwegian Seamen’s Churches, Ørnulf Steen has been to quite a few churches around the world, but the special thing about the one in Pattaya, he says, is that so many people come to the church.

“The church always reaches out to people, but here (in Pattaya) many also reach out to the church,” he says.

Therefore, it means a great deal for the church to get its own building which will provide a safe space for visitors.

“Pattaya is a place where many Norwegians both live and visit. The church is welcoming and including, people feel noticed. Many use the church to meet other people, but it also helps people in need. People in hospital and in prison.”

Yet, it is also important for the church to stay true to its role as house of God, Ørnulf Steen stresses.

“It should be clear, that it is a church. People should be able to see the reflection of God in the church.”

As so, the church is a “cultural, social and religious meeting point”. A combination which motivated Ørnulf Steen to accept the invitation to the world of seamen’s churches in the first place, when he was asked to be responsible for the building of the Norwegian Seamen’s Church in Rio de Janeiro, Brazil, some years back.

Today, Ørnulf Steen felt honoured to be at the opening of yet another new church. Because, it does not something that happens every other day.

The opening day started with a welcome speech by the current chaplain of the church, Ragnvald Seierstad.

“The church is a home away from home,” he said, adding the importance of making people feel welcome even when there is “10,000 kilometers to Norway”.

Cameras and mobile phones were snapping photos of the soon to be former, but proud, chaplain.

“The church is open to everyone knocking on the door.”

The Norwegian chaplain went on to thank for the building and for all the donations of, among other, chairs, an oven and most importantly a waffle iron. All of which were put to use on the opening day.

A musical input by the organist and a French horn made for a short break, before a long list of speakers started taking to the stage in front of the altar.

The microphone was passed from one important person to the other as the language switched between English and Norwegian with the occasional Thai greeting. From the chairman of the Norwegian Seamen’s Church to representatives from the Church of Christ to the Norwegian ambassador and even the lead architect. 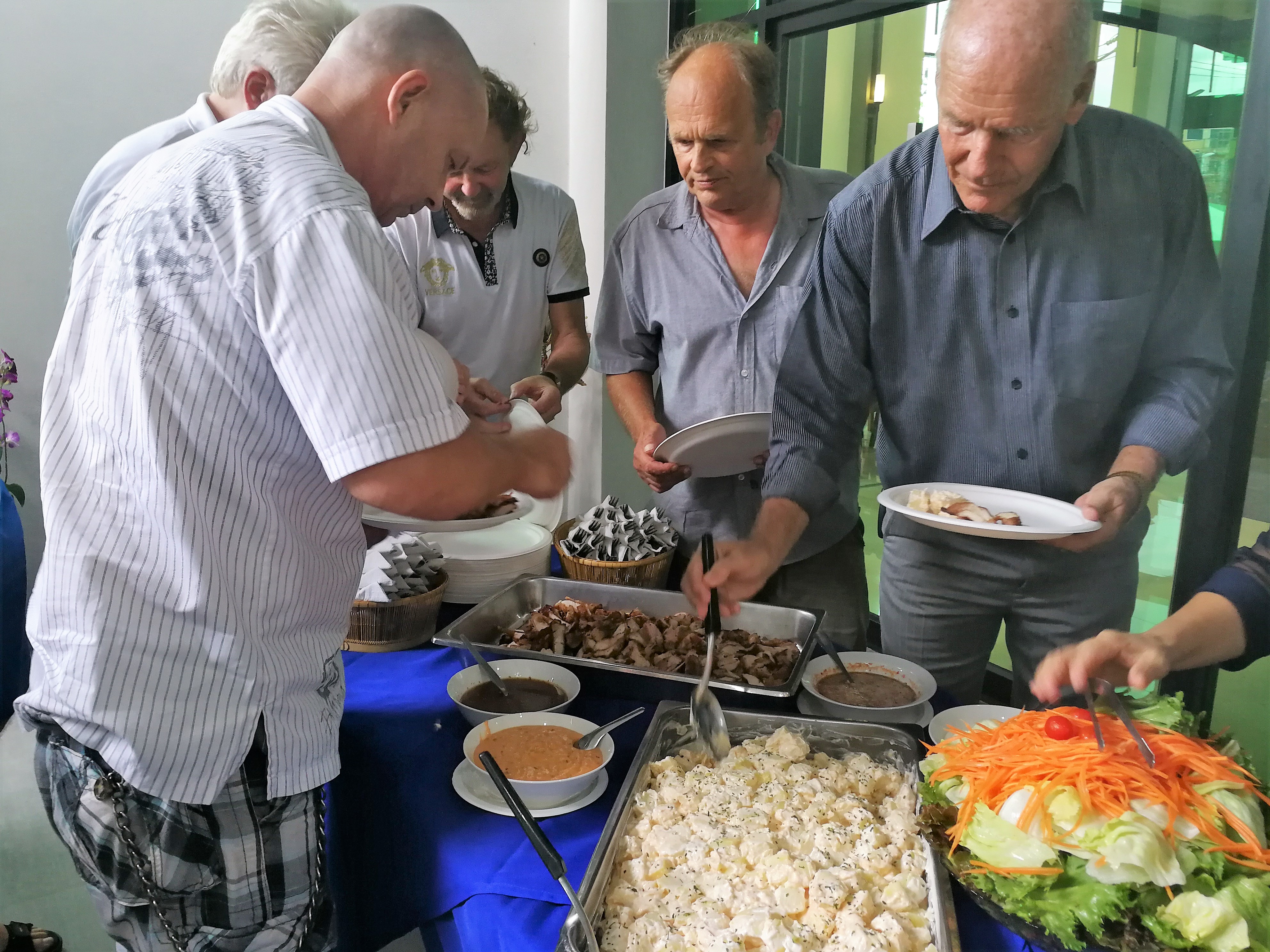 Ragnvald Seierstad then took to the stage to once again express how thankful he is for all the contributions made to the church.

One after the other, architects, designers, the chaplain and many other people worth thanking, were welcomed on stage for a gift of gratitude and a hand shake. When everyone had gotten their reward and photo taken, the attendees were guided outside where Kjersti Rødsmoen, the Norwegian ambassador, got a pair of scissors and the honour of cutting the red ribbon, officially declaring the church open.

Once everyone was back in their seat, the service by Ørnulf Steen began. While Norwegian dominated the singing and readings, everyone was urged to say the Lord’s Prayer in their respective language. The pastor then finished off with a collective blessing before the bells rang with a loud, high pitch that concluded the service.

Meanwhile, volunteers and employees had been working in the kitchen to serve colourful sweets, layered cakes with strawberries and whipped cream, brownies with nuts, fresh fruit and of course waffles with sour cream and jam once everyone was outside in the heat.

As the coffee-cups were emptied and everyone had gotten their desired or undesired sugar-rush, cake and coffee faded into a culinary fusion of roast pork, potato salat and spring rolls. Eventually, most people had rolled into the streets of Pattaya by late afternoon with big smiles, full stomachs and blessed hearts.