The Sports Authority of Thailand and the organisers of the 2013 Race Of Champions have announced that the event cannot take place as planned on December 14-15 due to the current political situation in Bangkok.

The Race Of Champions has been held throughout the world for 25 years, and this year was set to return to Rajamangala Stadium, where lethal violence broke out Saturday. 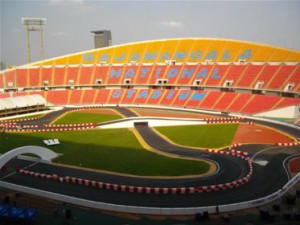 This is how the announcement sounded on the official Race website:

Our thoughts are with the Thai people during this difficult period and we wish that a peaceful solution will soon be found. The Race Of Champions has been held all over the world for 25 consecutive years and we are currently looking at options of repeating the success of last year’s event in Bangkok on another date.

Among others Danish driver Tom Kristensen who is the nine-time Le Mans 24-Hour race winner was signed up for the 2013 Race of Champions.

The organisers also add that fans who have already purchased tickets for this year’s Race Of Champions should contact Thai Ticket Major or their ticketing agent for further information on refunds.