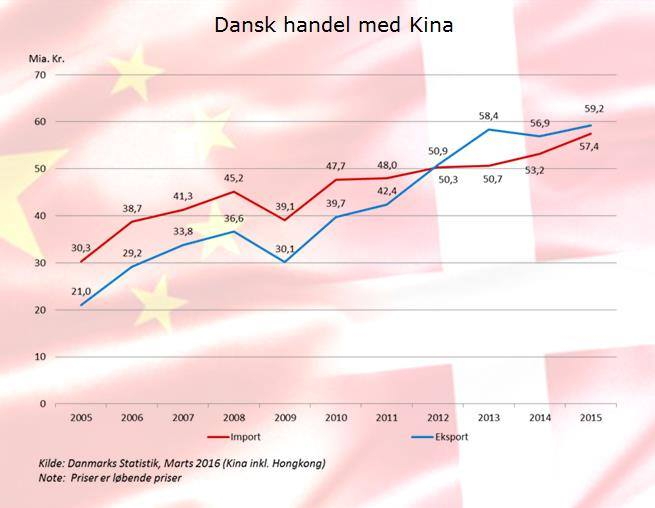 Trade in goods and services between Denmark and China reached an all-time high of 116.6 billion Danish kroner (114.6 billion yuan) in 2015, registering a year-on-year increase of six percent, shows the latest figures by Denmark’s official Statistics Bureau.

The Danish exports to China have nearly been tripled in the past decade, to 59.2 billion Danish kroner in 2015. A record 22.1 per cent increase was witnessed in Danish exports of goods, to 35.8 billion kroner.

“Denmark is ready to adjust to a new Chinese model based on more sustainable and consumer driven growth. This means that there will be an increase in demand for green technologies, food safety, high-class fashion and design, as well as advanced health and pharmaceuticals products, sectors where Danish companies are world leaders,” says A. Carsten Damsgaard, Danish Ambassador to China.

With the upcoming 13th Five-Year Plan calling for sustainable development in all aspects, more projects are expected to come along. In addition, a growing middle-class population in China also bodes well for the demand for Danish products of quality.

The volume of bilateral trade has jumped 127 per cent, from 51.3 billion Danish kroner in 2005, when Denmark exported 21 billion kroner worth of goods and services and ran a trade deficit of 9.3 billion kroner with China.

China is Denmark’s largest trading partner in Asia and its second-largest overseas destination for investment.

Denmark is one of the top three European countries with the largest trade volume to China per capita, at an amount of 20,079 yuan, on par with Germany and the Netherlands.

Meanwhile around 500 Danish companies have tapped into the Chinese market, hiring some 250,000 Chinese employees, making Denmark one of the EU nations with the largest China-bound investment per capita.