Daniela L-V Cassmer is since August 2019 at the helm of the Swedish Chamber of Commerce in China. Based in Beijing, she has already been in China for over 2.5 years, together with her husband (appointed as Head of SEB in Beijing) and their three children (aged 15, 14 and 12) and is well on her way with studies in Mandarin, with the goal of reaching HSK 5 in 2020.

“Following my husband to China for work – having left an exciting and fun job in Stockholm – I decided that my next project would be to study Mandarin, to make the most of my time in China. Therefore I registered immediately at a school for private lessons, which led to taking lessons five days a week. I also decided to join HSK, where you go from level 1 to 6. I reached HSK 4 level in December 2018 with good margin,” explains Daniela and continues: “I now have the ambition to take the HSK5 test, but it will take time, as it means being able to read around 2400 words and with grammar and speech at a high level. My goal is to reach the level this next summer since I can now only have lessons during Saturdays and Sundays.”

HSK (HanyuShuipingKaoshi) or the Chinese Proficiency Test is an international standardized exam which tests and rates Chinese language proficiency for foreigners.

“The whole family has now lived in Beijing for nearly three years, to which we arrived from our home town Stockholm where we were rooted with work and schools. Prior to that I met my husband in Paris where I lived for 12 years for studies and also working for International Herald Tribune as manager for their classified advertising department. So the thought of living abroad was not alien to anyone of us,” she introduces further.

Before the move she was also Sales Director for Adspiration Media Sales, an international advertising group for Sweden’s leading media titles, where she was responsible for Europe, Asia, and US; managing representatives in those regions and countries.

“I visited Asia very sporadically during earlier jobs, as responsible for international advertising at Swedish daily newspaper Svenska Dagbladet and at Adspiration for Bonnier News. I mainly visited Hong Kong and Malaysia. I have not had anything to do with China professionally previously, but thanks to my Mandarin studies and after soon three years in Beijing I have gained good insights into the Chinese culture and business world,” comments Daniela on her previous Asian connections.

“My background within sales, customer relationships, strategic work and with an international touch and approach were probably some of the decisive factors behind that I was appointed to this position. I am a Swedish citizen who has now lived in China for several years, resulting in understanding and insights. I have a humble approach to this role as General Manager for the SwedCham in China, where the capacity to manage multiple parallel processes is a must, while being able also to work side by side with a strong and competent board. Certain maturity as a person and regarding experience are needed in order to be able to combine these aspects,” thinks the new GM, who also has an M.B.A in International Business from Schiller International University in Paris.

“Taking a MBA is doing oneself a favour, as one learns decision-making and prioritising skills, and gets to do case studies outside the theory lessons and gains a better understanding of how things can be in practise. And to, in addition, take an M.B.A. in International Business feels highly relevant given the direction the world is taking, and where one covers areas such as cultural differences etc. My fellow students came from the whole world, which was also very fulfilling and rewarding. They are now spread out in various places in the world and I still remain in contact with most of them.”

“After completing my Diploma I was promoted to become manager for the section I had worked at previously, so this education became palpable directly. I held this position for the following six years until I moved back to Sweden in 2005 with my husband and our first child.”

“What will be useful in my new role as General Manager is of course partly my MBA but also the 20 years long working experience I have gained, half of it from working in Paris. I am experienced in anything from leading teams to strategic planning and execution. I am devoted to making a difference and I am a true business developer in parallel to being a trustee. My capacity to be both strategic and tactical, with a strong interest in people and businesses and their operations is probably my strongest USP in my role as GM at SwedCham,” Daniela elaborates. 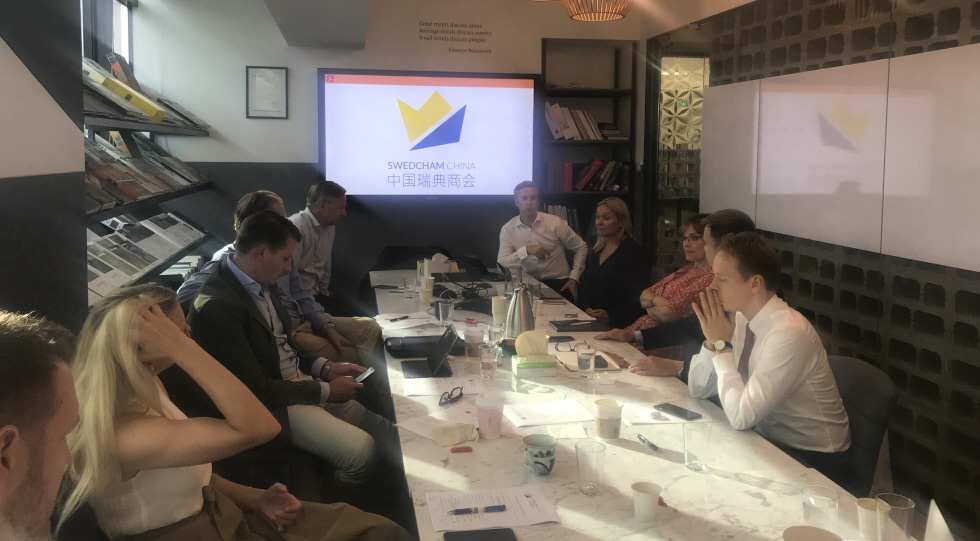 “I am tremendously glad and honoured about this appointment and am viewing with great seriousness my role in such an important organisation such as SwedCham in China today. It’s a big responsibility as we represent over 260 members in China and where the member benefit always comes first.”

SwedCham China’s mission is to promote the conditions for its members to operate in China through networking, events and seminars. It has a very important role when it comes to making it easier for its members to obtain information, know-how and ‘best practices’.

“We keep our eyes and ears open to the market and together with our colleagues in Team Sweden China we form a strong support and partner for Swedish companies in China.“

Information and networking are among the provided services most sought-after by the member companies.

“Another function of the chamber that we will give more focus going forward is to offer various courses and education. This autumn, for example, we are offering continuation course in Swedish and management courses, being very popular and fulfilling a need among our members.”

On its role going forward the GM says: “We are hoping that Swecham China will become the referral that Swedish companies turn to for information and advice on the Chinese market, and together with Business Sweden we can offer additional services to our members in order to effectively penetrate and grow one’s business in China.”

“We are constantly benchmarking against what other chamber of commerce organisations are doing, both within and outside China and want to have a modern and innovative approach towards how we best serve our members. Going forward focus will be on how we best communicate information via various channels to our members. We’d like our website to increasingly become a focal-point and source of reference where the information flow should be constant, in various forms,” she adds. Another focus area that the chamber has had since 2019 is Southern China where Shenzhen and Guanghzhou are growing in importance for the continuing development of the chamber.

“Together with Team Sweden we are trying to map this uncharted part of China, where more and more Swedish companies are establishing themselves, and where there is an open need for a meeting place like the one Swedham China can offer. We will develop this further during the latter part of 2019 and into year 2020.”

Finally, a comment on whether or not the image of China, from a Swedish perspective, has changed in recent years: “The China image from the perspective of the Swedish companies who are active in China is that it is still seen as a very interesting and important market for them. Swedish companies in China are highly successful over all. Everything evolves very fast here in China within technology, especially in the Greater Bay area, which is extremely dynamic. They are highly successful within innovation and technology there; something we in Sweden can benefit from through partnerships. In Sweden it is possibly so that there is increasing distrust in China and certain critical voices are heard in media but this is not something we who operate in China are affected by.”