He started to fill up suitcases with things every time he visited Thailand. One day at the office in Sweden he thought; ‘Why not do something in a larger scale?’. Today he is transporting boxes with clothes, toys and hygiene products almost every month and his plan is to start a home for orphaned children later this year.

First time Sebastian Wilhelmsson was in Thailand was in 2008 – it was a holiday. He quickly fell in love with the country and the people. When he met his girlfriend, they were staying in the countryside. He saw many poor people, who had nothing, and this was how it all started.

“I started to fill up my suitcases every time I went to Thailand. I felt I had to do something and give something back to these very humble people,” Sebastian says.

Sebastian continued the “suitcase-project” for some years. But last year in February, he started looking for companies who could transport boxes from Sweden to Thailand. 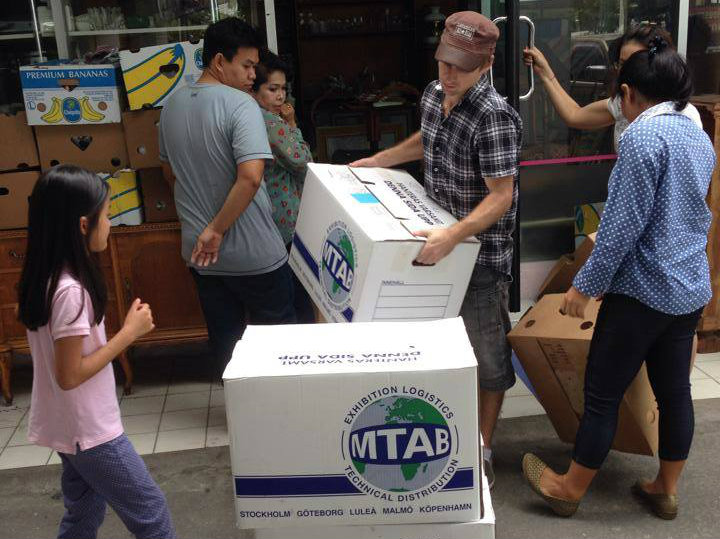 Today he is sending boxes almost monthly. People in Thailand help him with picking up the boxes at the warehouse and transporting them out to the children. The boxes contain everything from clothes, toys and hygiene products.

The journey to Ban Phe

One day a man contacted Sebastian. He heard about what Sebastian was doing and wanted to invite him to his place in Ban Phe to give him a free ride in his tourist boat.

“I said; ‘We can do that, but then I want to bring all the children I can gather, and drive them down there, so they get to see the ocean’,” Sebastian tells.

Together they are now planning “The journey to Ban Phe” – what Sebastian describes as his biggest project so far. The trip is around 500 kilometers and goes from the Bueng Sam Phan District in Phetchabun to Ban Phe, Mueang Rayong District in Rayong. The journey is planned to take place in March/April this year.

Sebastian finds the children through the church in Phetchabun. They are different ages up till 12-13 years.

The most vulnerable
It is very important for Sebastian to do things in a proper way.

Besides approximate 20 children, there will be more people joining the trip to help and take care of the children and make sure that everything is done in a good way.

“We must be careful and have people to look after the children. A majority of them never saw the ocean and they cannot swim,” he says.

Sebastian is also making insurances on all the children. The idea is to bring the most vulnerable children, however Sebastian accepts that he has to be selective.

“We cannot take the most vulnerable children with us on this tour, because that will be too much for them – what they need is something else,” Sebastian says.

An orphanage
Sebastian’s plan is to develop the already on going projects he started. Besides sending boxes and the journey to Ban Phe, he wants to open an orphanage later this year.

Sebastian is now 42. His vision is that maybe in 15 years he will be able to stay in Thailand for good and run the orphanage by himself. Until then he is looking for a person in Sweden who can take over the sending boxes-project and for people who can run the orphanage until he is able to do it himself.

“It is important for me that my projects do not grow too big too fast, because I do not want to start something that I cannot fulfill,” he says.

See the pictures from the latest shipment of boxes from Sweden to Thailand here:

2 Comments on “Swede dedicates his life to children in Thailand”