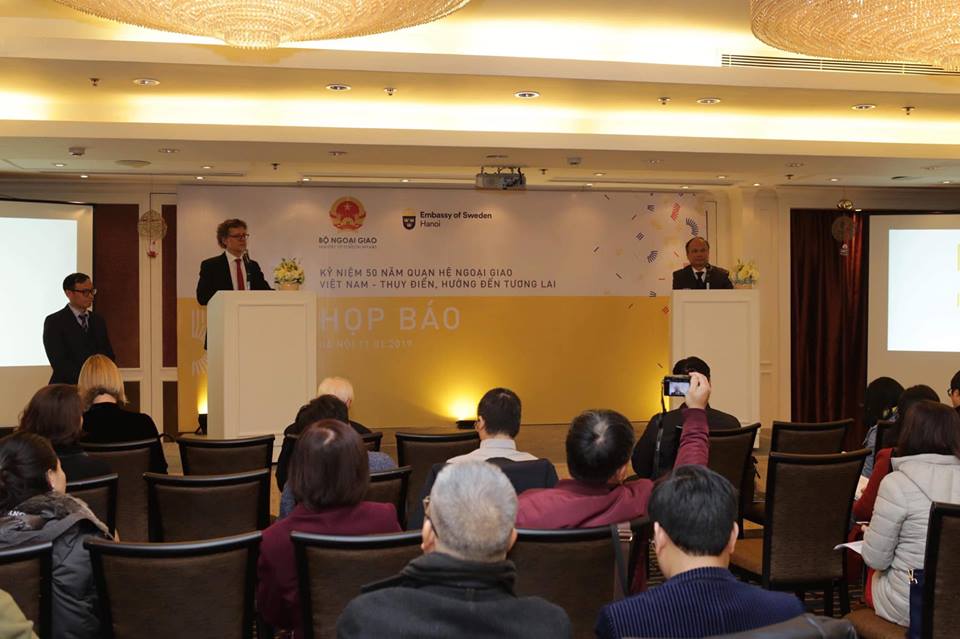 On Friday 11 January 2019, the Vietnamese Foreign Ministry and the Swedish Embassy held a ceremony in Hanoi to celebrate the 50th anniversary of diplomatic relations between Sweden and Vietnam.

At the ceremony, the program started with a tour for local journalists to visit historic places in the city where they can acknowledge on the bilateral relations such as the Vietnam National Hospital of Pediatrics, Vietnam Paper Corporation, Vietnam National Academy of Music, Casa Italia (where the first residence of the Swedish Embassy was located) and the former Swedish Embassy at Nui Truc Street.

In the evening of the same day, the Vietnam – Sweden Cultural and Friendship Exchange Program will take place at the National Government Guesthouse, cohosted by the Ministry of Foreign Affairs of Vietnam and the Swedish Embassy.

Permanent Deputy Foreign Minister, Bui Thanh Son, highlighted that Sweden was the first Western European country that established diplomatic relations with Vietnam 19 January 11,69. Over the past 50 years, the two countries have grown from strength to strength in all areas. The European country has provided 3.4 billion USD in non-refundable aid for Vietnam with symbolic works such as the Vietnam National Children’s Hospital, the Uong Bi Hospital in the northern province of Quang Ninh and the Bai Bang paper mill in the northern province of Phu Tho, contributing to the country’s socio-economic development.

Swedish Ambassador, Pereric Hogberg, also expressed that he recalled that 50 years ago, Swedish Prime Minister Olof Palme and people joined street parades demanding an end to the war in Vietnam.

He continued that Sweden became one of the largest donors to Vietnam during 1970-1990. The European country is always a trustworthy partner and will continue partnering with Vietnam in the future.

Moreover, the Swedish Foreign Minister Margot Wallström tweeted “Sweden and Vietnam celebrate 50 years of diplomatic relations. I strongly believe in a continued successful partnership and a constructive and open dialogue on challenges and opportunities”.

According to Embassy of Sweden in Hanoi’s facebook, both sides stressed the importance of promoting economic, trade and investment cooperation, the bilateral economic relations. The Swedish Government is committed to providing long-term support for Vietnam’s economic development through boosting trade, exchanging business solutions and sharing Swedish experiences.

The two countries affirmed they will continue to cooperate in multilateral mechanisms such as the United Nations, ASEM, ASEAN-EU to further contribute to peace, security, stability and development in the region and the world at large and engage in dialogues and cooperate to deal with global issues of mutual concerns.