Despite their meagre salaries, a janitor and his wife, who worked in a Swedish school kitchen, left 2.5 million kronor ($380,000) in their will, which will now be sent to the Philippines to help victims of the recent typhoon. 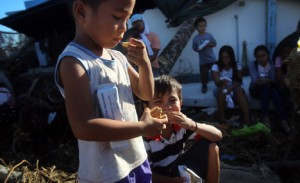 Erik and Agnes Larsson worked at the same school in Torsby in western Sweden. They did not have children of their own and instead managed to save money that they in 1989 decided should be put into a charitable foundation.

Other colleagues agreed that the gesture was characteristic of the janitor’s personality.

“Erik was a very kind and good person who cared about everyone. That he and Agnes chose to give their money to children in need does not surprise me,” said teacher assistent Margit Lindh.

The charity Save the Children was this week able to receive a check of 2.5 million kronor. The idea is to give money to charity periodically, as the couple left behind them more than nine million kronor, which they earmarked for “coloured children who are hungry, sick, or in need”.

The couple also left money in their foundation to be given out to a pupil at the small school who has shown proof of being a good friend.