On 3 March the Nordic House in Yangon,  the natural focal point for anything Scandinavian, opened its doors for visitors, marking the move to new premises. The Nordic House houses the Danish and Norwegian embassies as well as the Finnish and Swedish consulates.

It was a suitable occasion to put focus on this interesting Nordic unity in Myanmar and getting an update on the current Nordic engagement in the country. But first, let us take it back to the beginning.

The Nordic House in Yangon opened in 2012, as “kind of a coincidence” Peter Lysholt Hansen, Danish Ambassador in Yangon, explains. It was foremost a practical arrangement, when the Nordic countries started diplomatic missions in Myanmar under the same roof in 2012. Soon they recognized that the setup was interesting and now it has developed into an innovative pilot project, that might be an inspiration for Nordic cooperation globally.

“I can’t think of any Nordic collaborations that are so advanced. It’s like one joint embassy”, Peter Lysholt Hansen explains as he lists the benefits of this: “Naturally it’s easier to cooperate, which means cooperation between Nordic offices is without doubt more frequent than it would have been”.

This is among other things reflected in many joint engagements between the offices and of course this joint-hosted open house event in Yangon.

Swedish Minister Counsellor, Johan Hallenborg, shares this view: “Of course it’s easier to understand one another when you’re sharing an office and you sit together and talk on a daily basis. Everyone benefits from this when we share information and orientate one another”, he says.

“In the end it strengthens our joint Nordic profile in the country. We have a stronger voice and can offer a wide range of networking, which makes the house really attractive”, Peter Lysholt Hansen explains.

The project is still on a pilot basis and it hasn’t been evaluated yet, but attitudes towards sharing office space seems unilaterally positive.

“The pilot project is running smoothly, and we clearly see how our four countries and cultures jointly strengthen the Nordic presence in Myanmar”, says Hege Jørstad, Counsellor at The Norwegian Embassy.

“There should be some rationalization benefits, that’s the general idea, and I’m positive there will be”, the Danish Ambassador assesses. Economic benefits are already reflected in shared rental and running costs for the Nordic house and salary costs for shared staff, according to Hege Jørstad.

The house is administrated by two Norwegian diplomats with assistance from a handful of local Burmese. As Norway is the lead country, Norwegian legislation is the basis for local contacts and other administrative aspects of running a foreign mission.

In December 2015 an agreement between the four countries was signed, that lies out the guidelines for the administrative set up and cost sharing at the Nordic House. All offices uses the same personal and same accounting and financing processes. Administration costs a shared as is the telephone number to reach the reception. When working so closely as the Danish Ambassador described as “like a joint embassy” there could be a risk that national lines are getting blurred and diplomatic missions could get mixed, one might think. That is however of no concern to the representatives from the house. There are joint engagements and focuses are in the same areas, but the countries’ strategies and priorities differs, when you have a closer look.

The Swedish Office for example has a very clear main focus on development in Myanmar, which is also reflected on the staff, where four out of five people works with development.

“We want to increase the human rights and the freedom of speech in Myanmar, achieve broad local participation in the peace process and to stabilize children’s health”.

The Danish Embassy on the other hand has an almost equal focus on development as peace processes, rule of law and human rights, economical growth and educational support with a decimal overweight on economical growth. Peter Lysholt Hansen mentions a co-management on fishing resources in ten Myanmar villages as one of the big Danish supported programmes to come.

Norway’s focus areas are “the peace process, long term development assistance related to sustainable development, climate change and environment, clean energy and fisheries. Support to democratization, civil society and human rights have been, and continue to be at the core of Norway’s collaboration with Myanmar”, Hege Jørstad reports. Setting up business in Myanmar

It’s no secret that Myanmar is a challenge, but ending five decades of military junta in 2011, processing a more or less democratic election on 8 November 2015 and continuing economic growth have made Myanmar a prosperous nation for business.

“Grundfoss and Vestas have already probed Myanmar for potential business and there’s also a big interest from the textile industry”, Peter Lysholt Hansen says and adds that he’s positive investment interests will grow in the future.

“It’s a promising market. There are many great needs in the country, which means there are many interesting prospects for business”, he explains.

Both officials finds the interest positive, but at the same time they encourage potential investors to maintain composure.

“Myanmar is not an easy market to enter. You have to keep in mind that five years ago the country was completely inaccessible. So to start doing business here you’ll have to be patient, it takes a lot of time and effort”, Peter Lysholt Hansen says.

Johan Hallenborg adds: “It shall be a very conscious decision for companies to set up business in Myanmar. Challenges are easy to see. Infrastructure is not good, also concerning energy and internet. Corruption is still a serious matter.”

Johan Hallenborg is confident that the coming reform processes in the end will help Myanmar overcome many challenges. But currently he’s cautious: “We can open a few doors for companies, but it’s still limited how much help we can provide.”

The Danish Ambassadors tone in this matter is slightly different: “It’s a important task for us to assist companies with interest in Myanmar. We advise companies, identify potential partners for them and provide market information as well as help them through the bureaucracy”, says Peter Lysholt Hansen in answering how the Embassy can help interested companies.

Myanmar is part of the ASEAN Economic Community, which emphasizes regional cooperation. The economy has grown 6 to 7 percent in recent years and the growth is expected to continue.

The Nordic House is set to be evaluated in the second half of 2016. 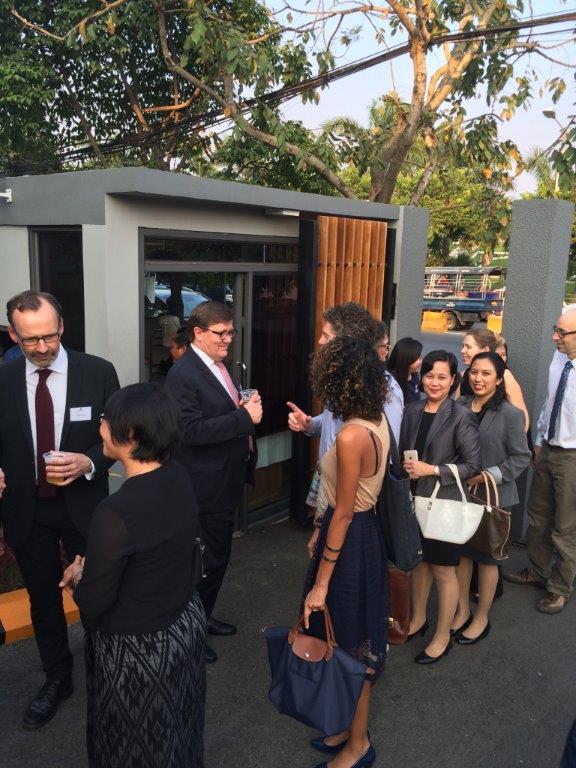