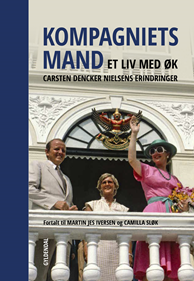 Carsten Dencker Nielsen was the last managing director of East Asiatic Company, the Danish trading company that up into the 1980’s was the largest Danish corporation. Before he died in February 2019, he had managed to complete a book about his adventurous life written with the assistance of two authors, Martin Jes Iversen and Camilla Sløk.

The book “Kompagniets mand” (Man of the Corporation) was released by the publishing house Gyldendal shortly before Christmas 2019.

Reading the book is like listening to Carsten Dencker Nielsen himself, telling about how he climbed the stairs of the EAC as a young man in the 1950’s and how fate would eventually make him the last man to close down the giant Danish company. After his graduation from the in-house business school of EAC, Carsten Dencker Nielsen was at first posted to Kenya, then onwards to Nigeria and Indonesia until he became the manager of EAC Japan from where he eventually assumed the position as the Managing Director of the EAC in Thailand, where it all began.

Forty years after joining the corporation, he was promoted as Managing Director of the whole company and tasked with winding it down by selling off the many branches of the company – eventually even the profitable business activities that could have meant a new rise of the company.

Through Carsten Dencker Nielsen’s recollection of his life in the EAC in the old days, we get a interesting insight into how the culture of the corporation was an important factor behind its growth. The strict rules could be seen as harsh but no other company offered young ambitious Danes an opportunity like EAC to rise from a middle class teenager to a world class business leader.

For many Danes, “Kompagniets mand” – which is published in Danish language – will be read with an interest in Carsten Dencker Nielsen as the man they met and interacted with at various stages in his career. Some will be interested in the behind-the-scene story of the deliberate closure over two decades of the largest Danish company ever, which has been the subject of other Danish books. Some will be interested in the revelations of the private man behind his many assignments and official functions.

Even for people who did not know the charismatic Carsten Dencker Nielsen, the book will be enjoyed as a well-written and captivating story about the twist and turns of a life lived richer and more adventurous than most.