The Creative Business Cup (CBC), a global ecosystem, network and start-up competition for creative, each year gathers the national winners to compete in its global finals in Copenhagen, including participants from Malaysia and Thailand. CBC has also developed a global network for stakeholders related to creative and innovative entrepreneurs, as well as for investors. And, significantly, CBC is on its home turf also appointed by the Danish government to support the country’s start-ups abroad but also raise the Denmark’s innovative profile. “CBC has to contribute to a new story about Denmark, that’s not about ‘hygge’ and candle lights,” states CBC’s CEO Rasmus Wiinstedt Tschering.

What CBC precisely does is to support creative and innovative entrepreneurs, connecting them with investors and global markets and strengthening their contribution to innovation in business and society. Start-ups are hosted and supported from fields such as craft & artisan, fashion, gastronomy, health & wellness, music, and toys & games – also diverting from the usual tech approach.

When the Startup Thailand start-up show 2017 took place in Bangkok CBC’s Danish CEO was there, partly to attend the national finals (that sometimes take place within an event) and also as a speaker. There, Rasmus got to introduce the CBC movement and showcased how corporations and start-ups can fruitfully collaborate. He explains to ScandAsia that CBC was originally for the artists and the creatives; for those who went to study design for five years but never had a single class in marketing or how to budget for a business and yet survive.

“Even before it got the CBC name it was thought out as a way for creatives to think more like a business person without losing their creative feel and competence but being able to live of their creative competences.”

A former policymaker working with EU issues in Brussels, Rasmus got involved in coming up with a new policy agenda to maximise the innovative contributions of Europe’s creative industries.

“I ended up in 2012 – 2014 appointed by the European Commission as Chairman of the Creative Industries Alliance where we had 30 experts coming up with ten recommendations on what can nations do to improve the conditions – how can we create more fashion companies, gaming start-ups, movies etc.” “For me CBC is taking policy and making it concrete; something real. These are real people with real ideas and businesses that connect with real investors and they go out to global markets, have challenges and opportunities etc. They lose they gain… What comes out of the start-up world for me is change, and empowerment that we don’t have to believe in the established. We challenge the established corporations with start-ups that find smarter ways and more innovative ways of doing stuff. That’s really exciting.”

“CBC is focusing on a certain kind of start-up. We believe in CBC that tech is understood, something that all companies work with, so calling it medtech, edtech, clean tech etc. doesn’t make sense; these are start-ups in education, in medical or in clean environment. So we look for start-ups that are not necessarily run by engineers or ICT people with MBAs. Actually studies show that a start-up has higher likelihood of succeeding if they don’t have too many MBAs on their team.”

With this focus the usually tech-driven start-up industry often frowns at CBC.“The start-up world does not necessarily like us. When we in 2014 had porridge as a winner many of the tech companies went like: ‘What’s this all about? If porridge can win – then it’s not serious.’ But that Danish winner today has many more employees than many of these tech start-ups that were around then. We are seen a bit difficult because we are called ‘Creative Business cup’. But aren’t all businesses creative if they are successful? Yes, they are! And it’s also difficult for the jury every year to define what constitutes creativity.” 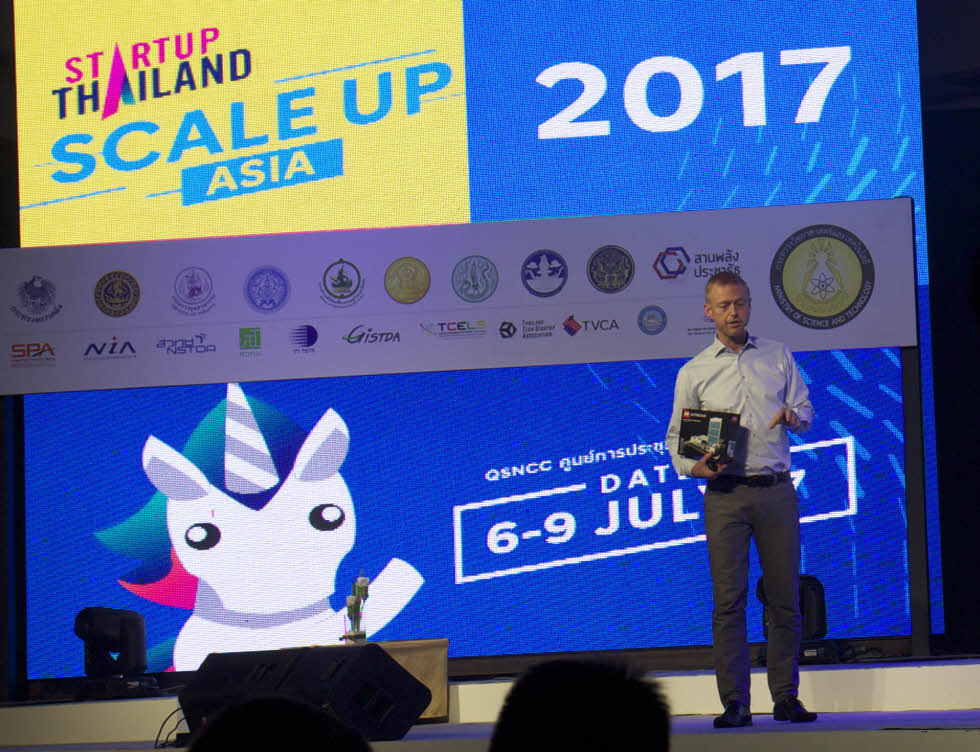 “The Dane who innovated porridge makes me think: Imagine if we could get the Chinese to eat potatoes instead of rice! The positive environmental impact from that would be enormous. These kinds of changes are not necessarily tech-based, I think tech supports great business ideas and makes it possible for these to be more efficient, but tech is not originally what makes it possible,” continues Rasmus.

At Startup Thailand he also gave several examples of what creative start-ups can do to ignite innovation in corporations; such as the nightclub Vega in Copenhagen helping with the entertainment on the ferry line between Denmark and Norway.

A Pernord Ricard Vice President showed up at the CBC finals a few years ago, telling Ramus: ‘I go to these start-up events because I might find good ideas for marketing, logistics, all kinds of good ideas from start-ups’.

“That made me think: If corporations do that, then that’s a service we can sell. Also Lego showed up that year and handed out business cards to start-ups. So my CBC start-ups are actually also not only my customers but also my product. I can sell them, so to speak. And maybe it’s better to have a corporate partner than to have an investor that wants equity. Maybe it’s better to have Lego or Ikea as a partner than it is to have a bank!” “There are lots of ways for them to work together. Many start-ups think: ‘We need to find a business angel’. Yes, business angels are great, but they’re also demanding – which is also good. But they have their own agenda, and their own vision for the company. I’ve been working with such investors myself and that is difficult!”

So CBS also offers creative solutions to companies who ask: ‘Could you help us, we have problems understanding where we are going?’ CBC matches the particular company with the start-ups who can help disrupt its thinking and develop creative pioneering solutions.

“How we go about it depends on the client. Arla came to us, and we suggested: ‘Let’s do it in this way’ The paid us to define the problem, find the start-ups, have the start-ups relate to the problems that Arla was facing, screen them and invite the best to come and to pitch for Arla and then find a winner, while at the same time a lot of action.”

Then there was the not so small assignment concerning Denmark’s attractiveness for both national and international start-ups. Rasmus started CBC as a semi-government agency, supported by the Ministry of Culture and Ministry of Enterprise in Denmark. While CBC became fully independent in 2016 Denmark, the Danish government currently supports CBC with a four-year grant (12 million DKK annually).

“What Denmark supports CBC with is to send Danish start-ups to Bangkok, Beijing etc. but also to convince foreign start-ups – Chinese, Singaporean etc. start-ups: Come to Copenhagen and create your company here!!”

“CBC is goodwill ambassador for Denmark wanting to attract start-ups from the world and create jobs. We want clever people to come and stay. We want to change this story-telling about Denmark from Hygge and H.C. Andersen to: ‘Denmark is a creative place’. If you’re a creative person follow in the footsteps of Anne Jacobsen, Lego etc. and come here where you can develop your creative ideas and actually find investors. Use your brain and you’ll succeed. So now we’re promoting: ’Drop Silicon Valley, and come to Copenhagen’! But I know Austria, Finland, Norway, Sweden and all the other countries are also saying: ‘Hey, come to us!’ So we have to compete.”

The global finals ceremony for CBC 2017 takes place on 16 November in Copenhagen, with the entire event covering five whole days.