At the same event, the company also announces that its Huda Gold (a sub-premium brand of Huda) received the Silver Medal of 2015 World Beer Championships in the US for the second time, with a score of 88/100 and marked “Highly Recommended” by industry experts for its outstanding and consistent quality. Huda Gold was granted this award the first time in 2013. “Congratulations to Carlsberg Vietnam on this important investment as well as the prestigious Silver Medal that Huda Gold proudly achieved. It is a testimony to the Danish origins of Carlsberg and in line with its 168 year history to bring the best of modern technology to Vietnam, and it confirms the long-term interest of Carlsberg to the development of Vietnam in general and the Central Region in particular. This new investment is also a testimony to the important and continuous support of the local authorities to Carlsberg here in Hue. I would like to express my gratitude to the Hue People’s Committee for this, and hope that this close cooperation will continue to the mutual benefit of Carlsberg Vietnam, the people of Hue and the consumers in the Central Region,” the Ambassador said in her speech.

“Once again, the Silver Medal of Huda Gold demonstrates its consistent and high quality over the years. From the very beginning of our journey in Vietnam, all Huda brands including Huda and Huda Gold have brewed with key ingredients imported from Europe, Danish modern technology and high quality materials certified by local authorized organizations. We are really proud of this wonderful achievement, and do believe that Central people will be also proud as Huda Gold is the only beer brand in Vietnam winning this prestigious award” added Mr. Tayfun Uner, CEO of Carlsberg Vietnam. Mr. Nguyen Van Cao, Chairman of Thua Thien Hue’s People Committee praised CBVN for its contribution to provincial revenue and believed that the company will have a greater support to the growth of Hue with the new canning line, and continued: “On this occasion, I also would like to congratulate Huda Gold for winning such a prestigious award. I do believe that this is a pride not only of CBVN but also of all people living in the Central especially Hue as Huda, which is a beer brand representing the culture, tradition, lives and people of the Central, once again its consistent and high quality is confirmed internationally.”

The new canning line with a total investment of almost 6,4 mil EUR is imported from Germany has production capacity of 60,000 cans per hour, or more than 50,000 cartons of 24 cans per day, which is 25% faster than the current canning line which had been in operation since 2011. This new canning line will be also extended into our recently launched brewery tour so that visitors will have a greater opportunity to explore our perfect brewing process of CBVN.

“The inauguration of this new canning line is a vivid testimony on Carlsberg’s continuous investment for its further sustainable growth in Vietnam. I strongly believe that the new canning line will significantly support us to continue brewing consistently high quality Huda and Huda Gold to consumers, as well as satisfying increasing demand of consumers in Central, stated Mr. Tayfun Uner. 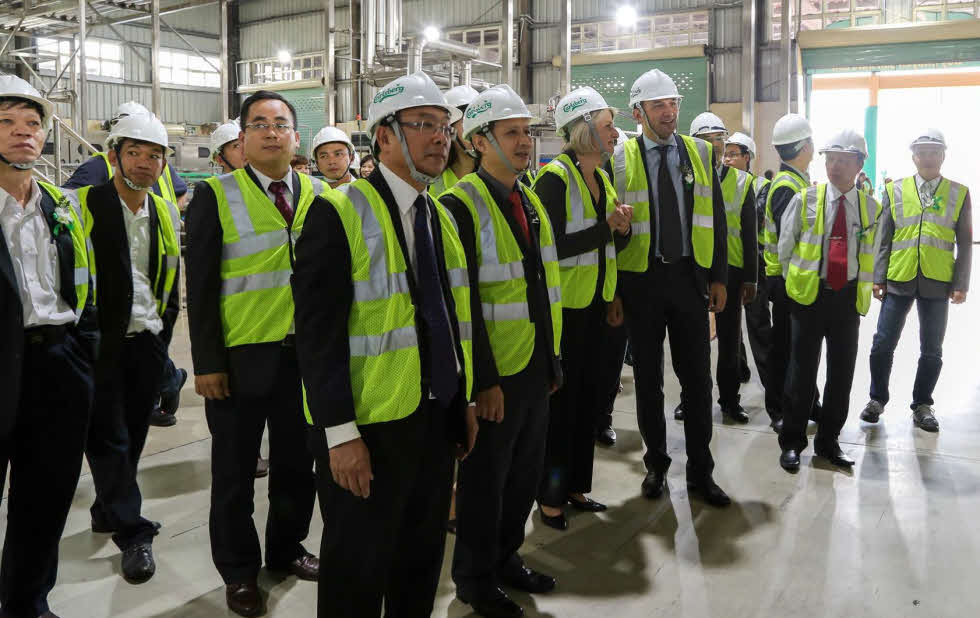 2015 is another successful year of CBVN with total volume increased 6% versus last year despite of a challenging environment this year. Besides the good business results, as a responsible business, CBVN is committed to continue its contribution to the social and economic development of Central, especially Hue in 2016, through increased tax contribution to build schools, hospital and roads to improve living standard for Hue people; as well as social and cultural activities such as being a diamond sponsor for Hue Festival 2016.

Carlsberg is one of the first Danish multi-national companies to enter Vietnam and made its first investment in 1993. For the first 20 years, Carlsberg managed its Vietnamese operations through Carlsberg Indochina. In 2012, a fully dedicated Carlsberg Vietnam organization was established with 3 offices and breweries in the North, Central and South of Vietnam. Carlsberg Vietnam’s brands include Carlsberg, Huda Gold, Huda and Halida.