The J.C. Jacobsen Foundation, a philanthropic arm of Carlsberg Malaysia, in January 2017 pledged its support towards elephant conservation by continuing to adopt three Pahang-born elephants at the Zoo Negara. Its cash sponsorship of RM 20 000 was presented to the National Zoological Society in conjunction with an up-close and personal session with the gentle jumbos inside the elephant exhibits. Malaysian Zoological Society hosted a special engagement day between representatives of the Foundation and the Pahang-born trio named Siti, Sibol and Teriang, aged 37, 38 and 36 years old respectively. Representatives were given an exclusive tour to the enclosure of the gentle elephants as they learned more about their diet, welfare and personality from the elephant keepers. The two female elephants Siti and Sibol were pampered by the representatives with papayas and bananas.

“This year marks the 31st consecutive year of our sponsorship of the elephants in Zoo Negara. We hope that our humble donation will help to subsidize the upkeep of the three elephants and our long-term commitment will raise awareness on the importance of elephant ecosystem. We urge members of the public to combat elephant poaching by boycotting elephant ivory trading and stop illegal elephant hunting that may constitute cruelty and threat to the survival of Malaysia elephants”, Pearl Lai, Executive Director of J.C. Jacobsen Foundation shared her views while presenting the mock cheque to Dr. Mat Naim Bin Haji Ramil, Director of Zoology, Hospital & Veterinarian Services and Encik Hafidz Bin Rahmat, Chairman of Public Relations & Marketing. 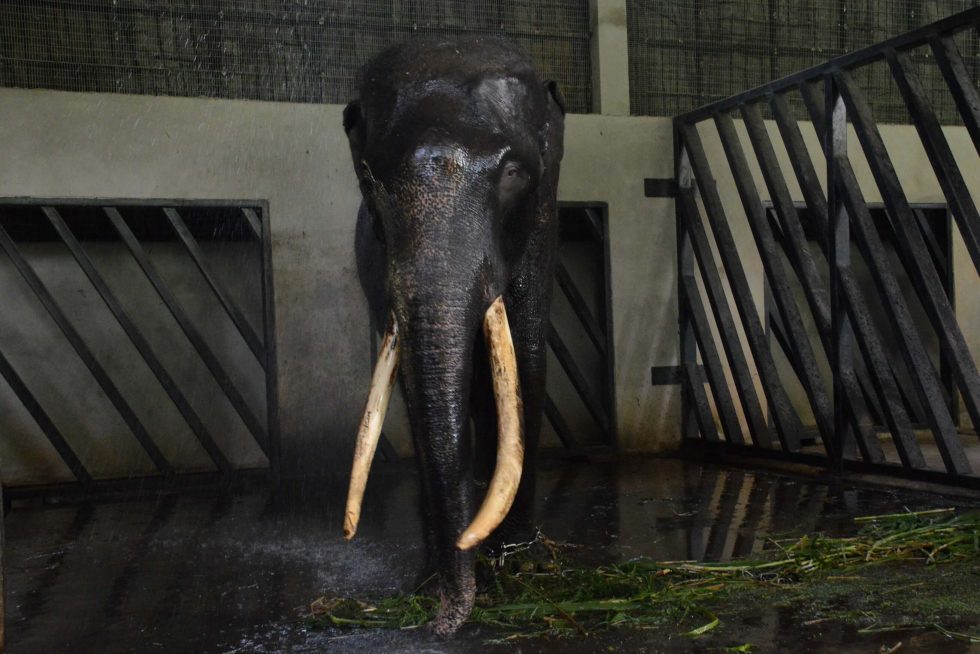 Representative of the Foundation Anna Torin Lehmann, wife to Managing Director of Carlsberg Malaysia Lars Lehmann and their son Julius who visited the zoo for the first time were present at the ceremony. Astrid Ruge, wife to the Danish Ambassador to Malaysia His Excellency Nicolai Ruge and their daughter Xenia, whom are very familiar with the zoo were also present.

“Thanks to the iconic Elephant Gate in Copenhagen, the Danish community can easily relate elephants with Carlsberg. Son of Carlsberg Founder J.C. Jacobsen constructed four life-sized elephant sculptures to represent his four surviving children hoping that they could have the strength and faithfulness of elephants. According to the Great Elephant Census website, the World’s elephant population is in drastic decline. The number of African elephants alone has dropped by 30 % between 2007 and 2014, primarily due to poaching to supply the growing ivory market. The J.C. Jacobsen Foundation not only champions elephant conservation awareness in Malaysia by living the legacy of the founder of Carlsberg but also supports the United Nations’ Sustainable Development Goal 15.9 (c) to enhance global support in their efforts to combat poaching and trafficking of protected species,” Astrid Ruge commented. All three elephants are currently residing in a large enclosure with spacious area for them to move around comfortably. The area is equipped with a water feature for their play-time and some items placed around the exhibit for their enrichment activities. For those who are interested to get to know them better can visit www.zoonegaramalaysia.my/ex_elephants.html.

J. C. Jacobsen Foundation was launched in June 2014, as a community outreach and an extension of the robust charitable activities of Carlsberg Malaysia. The Foundation is named after the founder of Carlsberg, J.C. Jacobsen, who was known for his passion for philanthropy. Aimed at enhancing and protecting the quality of life of Malaysians, the Foundation is committed to brewing a better and greener future by making a difference and impact to education, environment, humanitarian and wildlife.