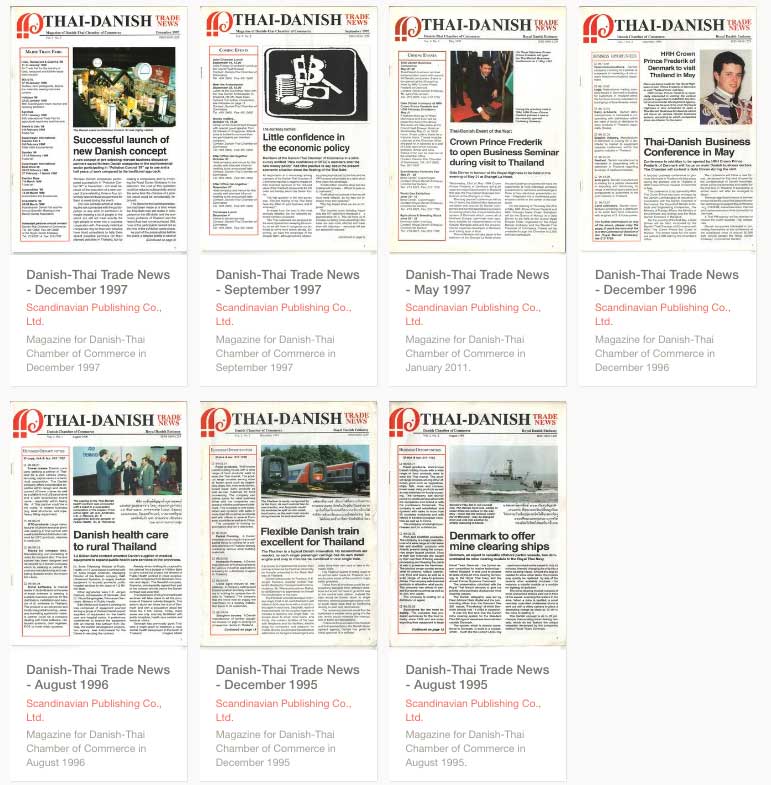 ScandMedia, the Danish graphic printing company in Thailand, began its publishing activity in Thailand in 1993 when it printed and distributed the first issue of the ScandAsia magazine. That was one year before the company was formally incorporated.

Shortly after, Mr. Christian W. Warming, Commercial Counsellor at the Royal Danish Embassy in Bangkok called ScandMedia’s founder, Mr. Gregers Moller in for a meeting where he asked him, if he would publish a newsletter for the Danish Embassy. He already had the name “Danish-Thai Trade News”. But he didn’t have a budget. ScandMedia would have to find the money themselves by selling advertisements for the newsletter. To be able to this, Gregers Moller asked if the newly formed Danish Chamber of Commerce in Thailand could be a third partner in the venture, which the Counsellor agreed to.

In 1994, the first issue of Danish-Thai Trade News was produced and distributed to contacts of the Royal Danish Embassy and the members of the Danish Chamber of Commerce – which was later renamed to Danish-Thai Chamber of Commerce. Unfortunately, ScandMedia does no longer have a copy of this historic first issue. If someone among the readers of ScandAsia has a copy, ScandMedia would be grateful to be allowed to scan it and publish it in a digitised form. The first issue from the year 1995 is also missing. The second issue from August 1995 carries on the cover an article about Denmark offering mine clearing ships to the Royal Thai Navy. This is followed up by an editorial by then Danish Ambassador Ulrik Helweg-Larsen mentioning a recent meeting between the Royal Thai Navy and a delegation from Denmark presenting the very versatile “Standard Flex” type of vessels produced in Denmark.

Another article on page 8 in that August 1995 issue describes how Danish F.L. Smidth & Co. was – once again – building what would upon its completion be the worlds largest cement plan right here in Thailand. The plant built in 1984 was at that time also the worlds largest. The story goes on to tell about how the cooperation started in 1913 after Kind Vajiravudh of Thailand had established the Siam Cement Company.

Each of the following issues of the magazine, which are now publicly accessible and available for download, brings new and amazing details in focus. News and features about the growing business between Denmark and Thailand during those early years of Danish-Thai Trade News, which we have largely forgotten today.

Did you for example know that Thailand – almost – bought the Danish InterCity train model? The purchase would have followed up on Denmark delivering the first diesel locomotives to Thailand back in 1931 built in cooperation between the Danish companies A/S Frichs and Scandia. Read here. Eventually, the financial shock in 1997 when the Thai Baht currency crisis happened derailed, however, the purchase.

Or that Denmark in October 1996 delivered Thailand’s first dedicated pollution control ship purpose-built to protect the Thai marine environment from oil spill disasters? The ship, Densuddhi, was built at the Faroe Island ship yard Tórshavnar Skipasmiðja and was among the last major bilateral development projects between Denmark and Thailand since the Thai GNP exceeded the limit for continuing these Danida projects. Read here.

Read all the old issues of Danish-Thai Trade News here – and sign up to follow when more old magazines are digitised over the coming weeks.

ScandMedia is digitising these old magazines as a tribute to the Royal Danish Embassy celebrating throughout this year the 400 year anniversary of official contact between Thailand and Denmark.