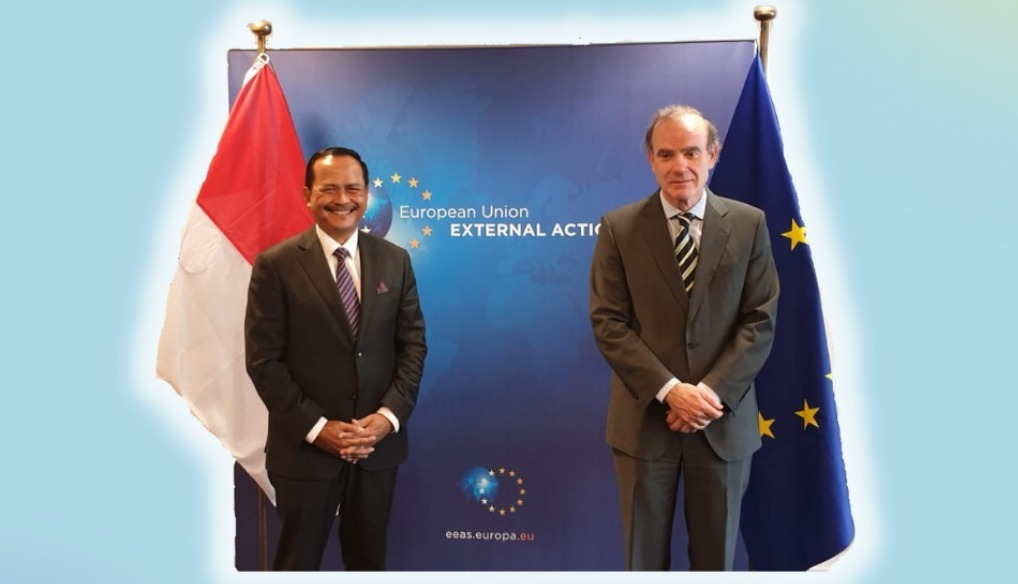 The 6th Political Dialogue under the Partnership and Cooperation Agreement between the European Union (EU) and Indonesia took place on 22 March 2022 in Brussels.

The Ministry of Foreign Affairs of the Republic of Indonesia said in this official release that the Dialogue covered a wide range of issues of common concern related to bilateral EU-Indonesia cooperation as well as regional and international issues, including the Russian aggression against Ukraine, EU-ASEAN relations, multilateral cooperation, global recovery from the COVID-19 pandemic, global foreign policy developments and Indonesia’s G20 Presidency.

Amongst other things, the Ministry said that the EU and Indonesia exchanged views on recent regional security developments, where they agreed on the need to find peaceful and inclusive solutions to conflicts while respecting principles of international law and the UN Charter. Both delegations expressed grave concern regarding the humanitarian situation in Ukraine and deplored in the strongest terms the aggression by the Russian Federation against Ukraine in violation of the UN Charter. The EU and Indonesia renewed their call for an immediate cessation of the use of force and a withdrawal of all Russian military forces from the territory of Ukraine. International humanitarian law must be respected and safe and unhindered access to humanitarian assistance for those in need in Ukraine must be allowed. Both the EU and Indonesia agreed to continue to work together closely and stand up for the international rules-based order, the principles of sovereignty and non-aggression as well as for a peaceful diplomatic solution through diplomacy.

Both parties also shared their analyses on other major foreign policy issues such as Afghanistan, the Middle East Peace Process, and the situation in Myanmar. The EU and Indonesia delegations took note of the ASEAN Special Envoy’s visit to Myanmar and reiterated the need for timely implementation of the ASEAN Five Points Consensus of 24 April 2021 in its entirety in order to pave the way for engaging all stakeholders toward national dialogue and reconciliation. Indonesia took note of the appointment of an EU Special Envoy for Myanmar. The EU underlined the EUSE’s readiness to coordinate closely with the ASEAN and UN Special Envoys in support of their efforts to bring about a resolution to the crisis in Myanmar. Both delegations agreed on the importance of the continued implementation of the EU-funded Integrated Programme for Enhancing the Capacity of the AHA Center and the ASEAN Emergency Response Mechanisms.

Sharing the same values, the EU and Indonesia underlined the importance of strengthening the international rules-based order and reiterated their commitment to multilateralism and to continuing to promote peace, stability, and prosperity in the Indo-Pacific and in Europe. The EU congratulated Indonesia on its strong leadership as the current holder of the G20 presidency with the theme “Recover Together, Recover Stronger” and encouraged the presidency to address existing and new challenges. Both parties agreed on the importance of SMEs and the digital economy in the design of global economic recovery policies. The EU reiterated its willingness to build on the close cooperation with Indonesia and ASEAN during the Indonesian ASEAN Chairmanship in 2023.

Mr. Enrique Mora, Deputy Secretary-General of the European External Action Service, and Mr. Ngurah Swajaya, Director-General for American and European Affairs in the Ministry of Foreign Affairs of Indonesia, co-chaired the Political Dialogue.