Her Majesty Queen Margrethe II of Denmark received Prime Minister Modi at the historic Amalienborg Palace in Copenhagen, where he briefed her majesty on the increasing momentum in the India-Denmark ties in recent years, according to news reports.One of the key topics of discussion was the Green Strategic partnership and he lauded the Danish Royal Family for their efforts in furthering social causes.

In his first time ever meeting H.E. Ms Sanna Marin, Prime Minister of Finland, both sides expressed their satisfaction at the progress made in the implementation of the outcomes of the bilateral Virtual Summit held on 16 March 2021. Both agreed that areas like sustainability, digitalization and cooperation in science and education were important pillars of the bilateral partnership. 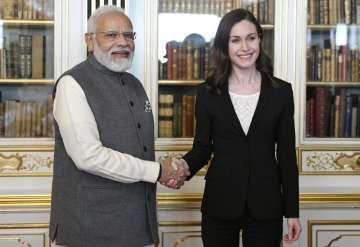 Modi, who arrived in Copenhagen last Tuesday from Berlin on the second leg of his visit to three European nations, met Katrín Jakobsdóttir, Iceland’s Prime Minister on the sidelines of the second India-Nordic Summit in the Danish capital where they discussed . They discussed boosting ties in areas like trade, energy, fisheries and more,” the Prime Minister’s Office tweeted.

The summit stressed the importance of vibrant people-to-people contacts through education, culture, labour mobility and tourism, areas in which the Nordic countries and India witness a steady rise.