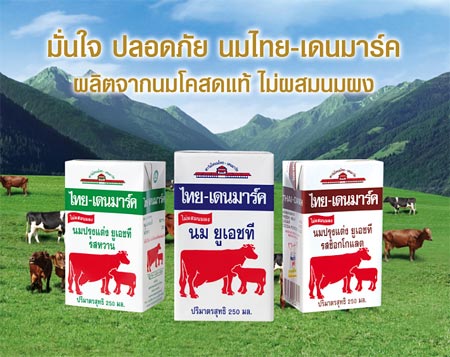 With the implementation of ASEAN economic cooperation in less than two years, the Danish dairy industry is well placed to tap into a huge market of 650 million consumers. The strength of Thai-Danish brand offers Denmark a huge advantage, according to a Danish consultant.

It has been almost 20 years since Danida and the last Danish employees left the Thai-Danish dairy project in Muak Lek, north of Bangkok in Thailand. The brand Thai-Danish, with the two red cows on the white UHT milk carton, however, still is one of the most recognizable brands in the Thai market.

Not only on supermarket shelves but also in the average Thai consumer’s mind. The awareness of Denmark as the nation, which helped pioneer industrial-scale milk production in Thailand, persists.

But no Danish company has taken advantage of that potential today, and that is a huge mistake, said Lars Siggard Andersen, who owns the consultancy company, Andersen Consult.

“Everything regarding milk and dairy businesses have something to do with Denmark. That is how the Thai people see it. No Danish companies are taking advantage of that today,” he said.

“The whole Southeast Asian region is simply ready for Danish technology and know-how that we have about milk production. Potentially there are 650 million people who are potential customers for milk, butter and yoghurt. It can turn out to be a huge business opportunity for Danish dairy industry and related companies.”

The dairy production in Thailand has by no means developed to anywhere near the level that Denmark has achieved, and that is exactly why Danish companies are well placed to exploit opportunities that present themselves in the region, the consultant said.

“They [the Danish businesses] just need to realize that they can actually make a difference in the dairy industry in Thailand, because they can offer a wide range of dairy production equipment, technology and knowledge,” said Lars Siggard Andersen, who added that he already was in contact with the Dairy Farming Promotion Organization of Thailand (DPO).

“Within DPO they were very excited and asked me “where have you been?” he said, referring to the year of 1995 when the last cattle consultant left the Thai-Danish dairy farm at the same time Danida concluded and discontinued the support to the project.

Andersen Consult and the Danish growth agency Væksthus Midtjylland are currently planning a trip to a Farming Fair in Thailand, with a number of Danish companies, which have already shown interest in business opportunities in the region.

Lars Siggard Andersen believes that the focus of the Danish Dairy and Farming sector has been on China over the past many years, which has left the rest of the Asian countries in the shadow.

“Denmark has a unique and invaluable brand in Thailand, so my call to Danish companies is to get going, because the possibilities in this region are plenty. Let’s do business now,” he said.