The restaurant area of the Swedish furniture giant IKEA in Bangna district Southeast of Bangkok was a true color explosion of red and orange decorations as the crayfish party was about to begin on Friday 16 August around 19.30 pm.

The tables were garnished with hats, aprons and songbooks in traditional Swedish style and red crayfish shaped paper chains added to the festive atmosphere of the restaurant.
Simultaneously with IKEA in Singapore and Malaysia, IKEA Bangna in Bangkok hosted their first crayfish party with an all-you-can-eat buffet with boiled Swedish crayfish and other Swedish delicacies. The event was eagerly welcomed by the Thai people. 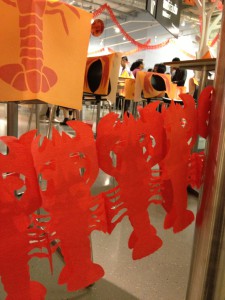 “We had 600 tickets and they were sold out in two days,” Assistant Marketing Manager, Tissana Wateesatogkij, said.

“We are really excited about this and so are the guests. It is a huge thing for us to see how much they want to try something so different,” she added, while hungry people were passing by carrying plates with overwhelming heaps of crayfish to their tables.

Want to share Swedish culture
The idea behind the huge crayfish event is obvious for Supacha Makaranon who is the Food and Beverage Manager of IKEA Thailand.

“We know that Swedish culture and tradition is something that many Thai people like. We get so much positive response from our IKEA promotion in Thailand, so it was natural for us to share this very Swedish thing with the Thai people,” she explained.

At this time last year time IKEA Bangna tried to introduce the crayfish for the guests by serving it in the restaurant. People loved it, and that convinced the IKEA staff that an actual crayfish party would become a success.

The price of the tickets also plays a role for the surprisingly huge interest for the event, the food manager said. As an IKEA Family member the price was 250 Baht, and for non-members 500 Baht. It is cheap for a meal where the crayfish is directly imported from Swedish fresh water. But as she adds, for IKEA it has nothing to do with profit.

“For us this is actually quite an expensive arrangement, so we are not doing this to generate profit. We want to share the Swedish culture, and we are very happy to see how much the Thais love it.

Asked if there will be a crayfish party 2.0 next year there is not the least doubt in the answer.

“We will definitely do this again next year, and we are also planning to host a similar event in December, where we will serve Christmas food in the buffet,” she assures.

Embassy staff was the only to be found at the party
Some people may perhaps think that this was an event that would mainly attract Swedish people. Especially if you consider how the Swedes eat their crayfish and shrimps with their fingers, drink their Swedish snaps and after a couples of those start singing their traditional Swedish drinking songs of which especially “Helan går” is well known. But this was not the case. Surprisingly few Swedish people were to be found apart from the staff of the Swedish Embassy who on the other hand turned out in a large numbers, and were surprised how much people loved it. “I really wonder how the Thai people knew about this event, but it is just amazing to see how they fill their plates and really seem to like the food,” The Swedish Consul Pär Kågeby said, while he with great routine separated one out of many crayfish before he ate the slightly salty and fresh meat.

IKEA as promoter of Swedish culture

Taking his questions to some of the Thai participants, their answers were pretty much the same:
“We love crayfish and we heard about the event from IKEAs website,” they said.
The rumor had spread fast. In a group of friend where one of them was an IKEA staff, the friends had heard about the crayfish party before she had even though she is working there.

It seem that IKEA has taken over the role as promoter and ambassador for Swedish culture, and although it might take some time before the Thai people start to drink the snaps and sing along on Swedish drinking songs, IKEA really succeeded in creating a great meeting of two cultures.