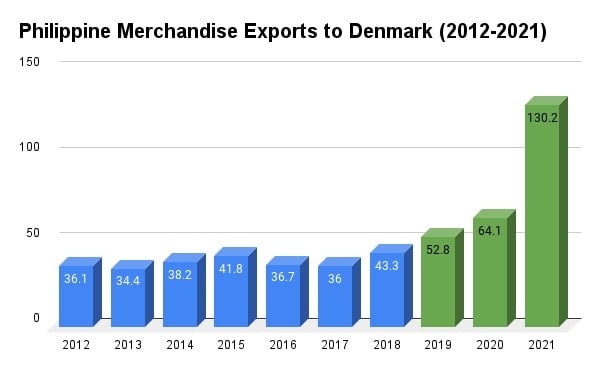 Despite the pandemic, Philippine exports to Denmark rose 205 percent year-on-year in September, according to the Department of Foreign Affairs (DFA).

Preliminary data from the Philippine Statistics Authority (PSA) and the Department of Trade and Industry (DTI) show that Philippine exports to Denmark accounted for $130.2 billion in September 2021 which is a triple-digit growth compared to $24.7 billion in the same period last year.

The top export product in 2021 comprising 49.9 percent of all export is the export of the catamaran ferry built by Austal Philippines while hearing aids had the highest growth at 727.6 percent, according to DFA.

Speaking on the matter, Philippine Ambassador to Denmark Leo Herrera-Lim said in a statement: “Our latest export growth rate shows a solid growth with a performance even stronger than pre-pandemic levels. Total exports in 2018, before the establishment of the Philippine Embassy in Denmark, were $43.3 billion. Now, it is significantly higher by more than 300%,” said in a statement.

“As we continually enhance our trade cooperation with Denmark, we are confident that we will see a sustained improvement in our exports for the coming years,” said the Ambassador.