When entering the check-in at the open air terrace on Sila Evason Hideaway (today named Six Senses Samui), the first thing you come across is, exactly as described, an “unsurpassed panorama” that is truly stunning. Situated on the northern cape of Samui Island in Thailand, the view of the sea, Koh Phangan on the horizon and the resort’s infinite pool below, is simply majestic. And further inside the location from a roof-top restaurant on the sloping headland; way over 180 degrees view of sea, islands and mountains spread out in front of your eyes.

Quite soon one gets a feeling of having entered another world – where life is perfect, free from the usual constraints of life and where only friendliness and relaxation prevails.

Indeed this Six Senses resort’s Swedish General Manager, Mr Eric Hallin, has specifically noticed how the place has this immediate effect on the visitor.

“It is an incredible location. Upon arrival you already have a breathtaking view, and when seeing this, people relax three turns. It has that impression on people,” he explains in its outdoor restaurant and ads: “We try to convey that impression with everything else, even the music you can hear is very soothing. And our staff’s behaviour is very calm.”

Appealing to all the senses: sight, sound, smell, taste, touch and beyond is one of this world-renowned resort company’s values.

“What we sell is a dream so when guests come here, we try to make them enter a movie, where you see what you want to see. It is an illusion that we assist in creating, between the guests and our staff,” says Eric.

It is clearly upscale but still very different and on par with perhaps only well-known resorts on Bali – and Six Senses’ other resorts for example in the Maldives. And Eric thrives with the challenges of running such an establishment; applying the company’s well-defined core values on the whole place and its guests. But first, when meeting Eric, a retrospect is in place, which means going through a career within the hospitality business spanning over nearly 30 years, almost entirely in Thailand apart for a few years in the Maldives. He is like an encyclopaedia on the hotel and tourism development in the country which he has personally contributed to. Having seen Bangkok’s hotel industry grow from just 7000 hotel rooms up to today’s nearly 100 000 he can talk for hours, namedropping hotels that changed names and operators over the years.

He started working with the tour operator Jambo Tours taking care of the Far East back in 1975 and became their marketing manager for several years. Then he went on to work as the sales manager for Indra Regent Hotel in Bangkok, and due to his success was offered three, four positions as general manager.

“I became good at selling, and based on that I was offered hotel manager positions,” he remembers. Then he chose Rose Garden and later went on to Dusit Hotels & Resorts in charge of sales and marketing for the group as well as for Princess Hotels & Resorts. In Thailand he also worked as GM at Dusit Inn in Chiang Mai and Chiang Rai for some years. He says he could consider going back to that area again. It was also there in the north he started learning the Thai language.

In the early days before its tourism expansion, Thailand had around 700 000 visitors per year. On the way to the old Don Muang, the road had a water channel between the lanes where water buffalos grazed. The turning point came with the new airport in 1987. “All of a sudden tourism jumped up to several millions. Landmark Hotel started around ‘87 and never needed to do any marketing. With the incredible expansion of incoming traffic, Rembrandt Hotel & Suites Bangkok and several hotels that opened then were all full from the start,” Eric remembers. Soon charter flights followed, which Eric thinks was negative for Phuket. “You could have grown much smarter. Much of the charter is coming only six months per year, and it made the image of Phuket cheaper for those who pay more.”

The Scandinavian charter companies played a significant role in this when they went out to business people and said: “Build a hotel and we will guarantee you guests and can pay in advance, for a guaranteed price.” The result was that the prices on their way up froze, and all of a sudden the island had a surplus of rooms. But also, the image of the destination went down, thinks Eric.

In 2006, the situation has changed immensely with Phuket well on its way to become a world class destination, with almost all the world’s five star chains having a hotel there and its high-end residential property market booming.

Early players such as Amanpuri and Dusit Thani Laguna Phuket, followed by Banyan Tree, has contributed strongly to this upgrade, Banyan Tree now charging from 20,000 Baht as starting price for a night’s stay.

Samui, with overall higher prices than on Phuket, Eric believes also has a much higher profile than a few years ago. At Sila Evason Hideaway – being among the island’s most expensive resorts – their Presidential suite costs 114,000 Baht per night and the least expensive Hideway Villas nearly 20,000 Baht during high season.

Six Senses subscribes to a philosophy of ‘Intelligent Luxury’, ‘Redefining Experiences’, Innovative Style’, ‘Balancing Senses’ and really enjoying themselves – something easily noticeable in the laidback and friendly interaction between staff and guests.

“I think people come here partly for to totally relax. You don’t feel a need to look in a special way, or act in a special way, it is a bit ingenuous,” says Eric. “In principal, hotels like ours, sell lifestyle more than hotel rooms. So we have no varnish on the wood, use natural products as much as possible and are also trying to become more balanced concerning the food with no goose liver on the menu. All these things belong to the lifestyle we are trying to sell.”

So how do Eric and his staff create that dream and meet the supposedly high expectations of their guests? By delivering the core purpose ‘innovative and enriching experiences in a sustainable environment’. And by having ongoing extensive training for all staff and in principal never being pleased with what you have got.

“You always try to improve what you are doing; the service, what facilities you have for the guests. Full occupancy is not ideal; then we are standing still. You must find a balance where the customer willingly pay and feel pleased doing that to get a feeling of satisfaction, while you can get enough revenue.”

“And in order to get them pleased you must also have satisfied staff. We treat them differently than what is normal procedure.” We invest in our people – which is very stimulating,” he says. Six Senses’ participative method in involving all its employees, continuously evolving, and striving for self-improvement is very much in accordance with Eric’s own, who recalls when he as a sergeant in his military service were criticised for not giving direct orders to his soldiers. No, shouting out commands is not Eric’s style of dealing with things. Rather, he is thoughtful, philosophical.

“For me, there is a saying: ‘You can lead a horse to the water, but you cannot make it drink.’ You cannot force it. So it is better if you can make people do things of their own will.”

Three things are important for Eric’s way of management. “First, you must know that you need to work together. Second, in order for people to do that, the goals must be very clear deep down among the staff so they understand them.” He says having the same goals is important, while the method to reach there can differ significantly. “Third, is how to communicate to make it work; what is said and not. There must be a system where you smoothly can convey opinions upwards and downwards.”

“All persons have intelligence, and it is a question of making them blossom in their own role,” Eric says about how to foster the employees. “By principle all persons can do all tasks, and you are not limited by starting somewhere. You don’t need a Doctor’s degree to become a GM. All people can potentially become what they want, I say to them. It depends on their own attitude and their own effort, and how much they want to do.”

And there is always a solution. Impossible is not the word. He mentions the Service Recovery that all staff are empowered with, enabling to quickly correct when something has gone wrong. They can offer a dinner for free, a glass of wine, or whatever suitable in response to a displeased customer. 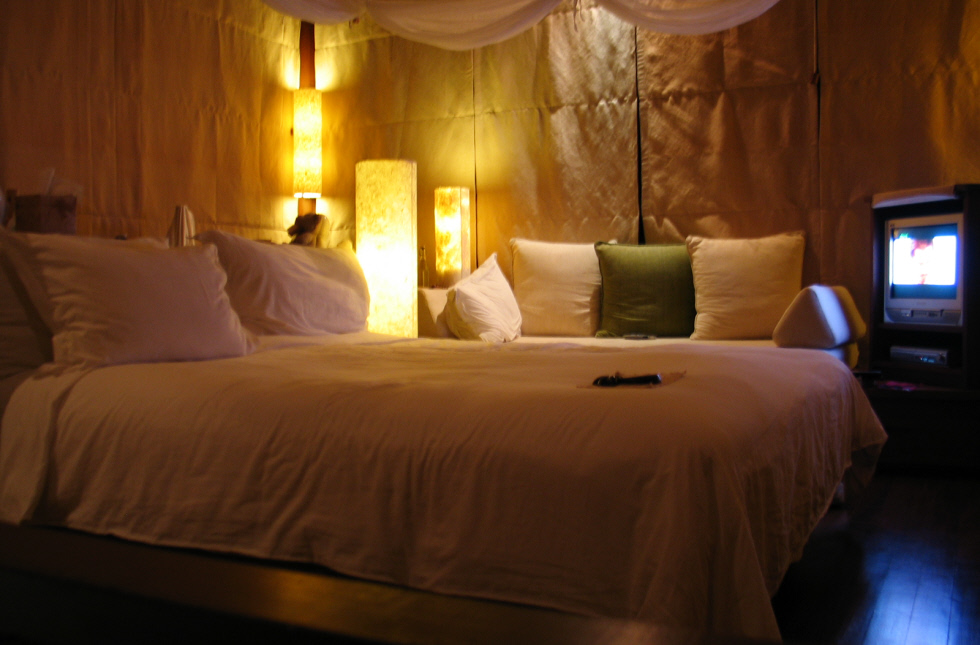 Six Senses is also known for its preservation of the environment in the surrounding areas and contribution to projects that benefit the community. “Here you have to fight with the owners if you DON’T do it; e.g. giving things to a hospital, or for elderly people, or supporting a school. Normally it is not always so easy to convince why such things are important for a hotel owner, but here you must,” says Eric who is happy doing that.

“I hope we can function as a good example. Now they are building a large desalination plant here on the island, like us. What we give to society comes back with interest one way or the other, even if it is not directly. The law of nature says so.”

One can wonder if not such a secluded and perfect resort as this one, with what it stands for, can rest assured that guests will keep on coming? No, Eric thinks they must develop all the time. “You get affected by the surroundings, by other people’s opinions; so many things. It is a constant development and hotels, such as this one, must grow with this. Otherwise you will never be able to fulfill the guests’ expectations, because those will be different tomorrow than today.

“I suspect we will gradually be much more focused on the holistic and things having to do with wellness. One must always make people enjoy something, but that they can also feel it is good for their health. I believe people are interested in learning things and when people’s experiences develop also their demands expand.”

But when Eric thinks he has achieved the goals for the resort – maximum two years from now – he says he will once again move on to new challenges.