A great number of Danes and their families living in Thailand participated on Wednesday 16 November 2022 in a meeting at the Royal Danish Embassy in Bangkok where Danes Worldwide briefed about some of the rules affecting Danes living abroad. In particular, the meeting focused on the current rules regarding moving to Denmark with a foreign spouse, how a Danish person born abroad can keep their Danish citizenship and the reduction of Danish State Pension for Danes living outside Europe. Lisbeth Kjersgaard, legal advisor for Danes Worldwide, was the main speaker on the three subjects and managed in an impressive way to clarify the sometimes complicated rules. As an example, the rules for retaining Danish citizenship for Danes born abroad turned out to be quite easy for most Danes born in Thailand to live up to. Anytime before they turn 22 years old they must submit an application and prove that they have been registered as living at an address in Denmark for a minimum of three consecutive months. If they cannot show that, they must prove that they have spent a combined 12 months visiting Denmark over the years. Only in case they cannot prove either they will have to pass a language test and in other ways demonstrate their close affiliation to Denmark. 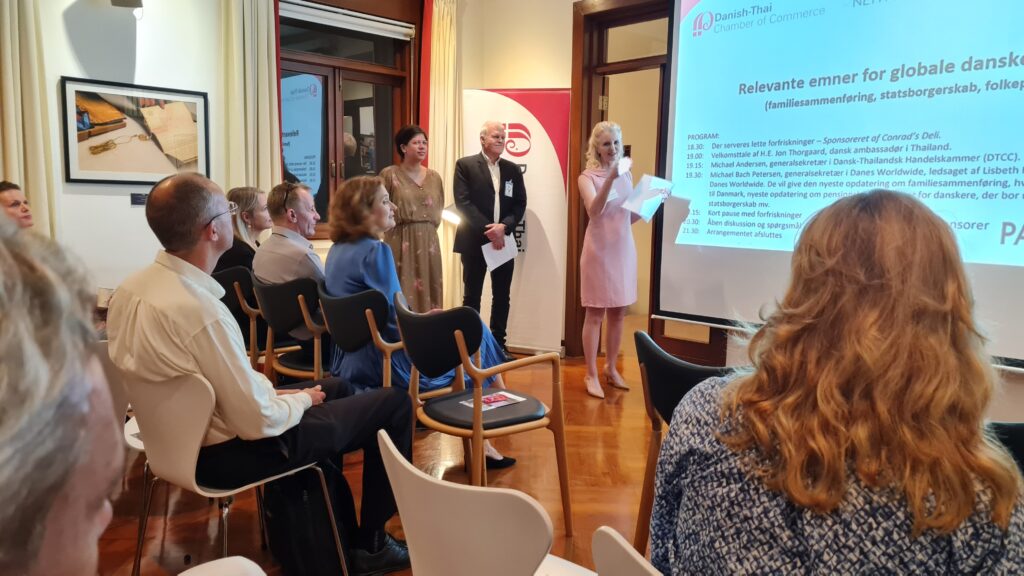 Before the briefing on the legal issues, local Danes Abroad representative Marianne Edelmann Krüger welcomed the participants and gave the word to the host of the event, the Royal Danish Embassy. On behalf of ambassador Jon Thorgaard,  Assistant Manager Ingrid Dahl-Madsen gave a very thorough briefing of all the activities that the Embassy is busy with.

Among others, Ingrid Dahl-Madsen mentioned that the embassy is keeping itself knowledgeable about the political situation surrounding the upcoming general election in Thailand expected to take place in the spring of 2023. She also mentioned the delay in issuing visas to tourists who want to visit Denmark and Iceland. The delay should be over in a month or two since the last of the new staff members, which the embassy has employed, had recently been cleared after a thorough security check and had started working.

Ingrid Dahl-Madsen was followed by Secretary General of the Danish Thai Chamber of Commerce, Michael Andersen, who introduced the Chamber and thanked the embassy and the Danes Worldwide for the good cooperation they enjoyed. 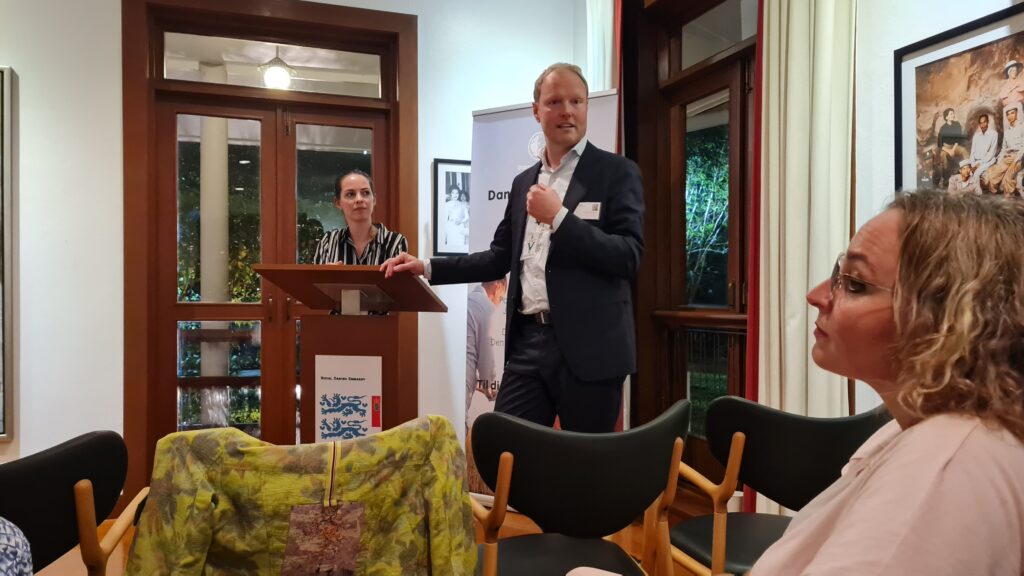 The meeting served also as an introduction to Michael Bach Petersen, the new Secretary General of the Danes Worldwide. Michael Bach Petersen was appointed to follow in the footsteps of his predecessor Anne Marie Dalgaard only five months ago. For him, the meeting was an opportunity to get input from Danes living in Thailand regarding what they wanted the Danes Worldwide to focus on. A lively Q&A session after a coffee break gave him plenty of input regarding the state pension issue, the loss of voting rights for Danes abroad and the issue regarding issuing of driving licenses to Danes abroad.

The meeting was generously sponsored by Pandora and Conrad’s Deli and was attended by around 70 people.