SWEA (Swedish Women’s Educational Association International, Inc) in Bangkok recently hosted the 2018 annual regional meeting AGM for the Asia Pacific. Swea Bangkok President Anna Frummerin, with a large team had planned and organised the three-day programme in Thailand, which also included a local trip that delegates could join. At the AGM, the region’s joint activities, including participation in other Swea International events, were presented by Regional President Anna Centerman in Beijing.

The accounts were duly presented by Regional Cashier Ann-Marie Gustafsson.

Donations and scholarships in 2017 amounted to 31 847 USD or 45 000+ SEK, and included, among other things, a Swedish cook book in Beijing, Swedish school Melbourne, and a Easter party held in Klong Toey, Bangkok.

The Swea vision was presented to the participating local Swea section representatives. This vision includes:
– To be the largest Sweden-promoting organisation outside Sweden
– A “must” for Swedish-speaking women who move abroad
– And organisation one is proud being part of
– A transparent organisation with a clear message
– A professional, modern and communicative organisation 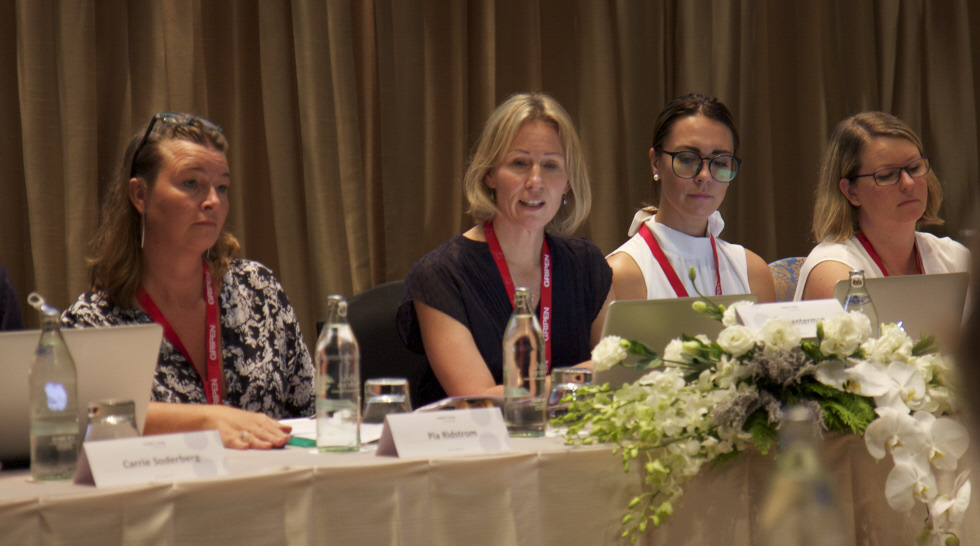 ‘Tomorrow’s SWEA’, in recognition of international changes was also highlighted, which is to be an active and professional network for Swedish-speaking women with different background and in various stages in their life, as well as to promote friendship, contacts and their Swedish identity.

“We are about 80 members but we have quite a large turnover of members because many stay for 2-5 years and then move on. We had a great 80’s party this spring which was very successful for celebrating our 30th anniversary,” informed Catarina.

“As in all countries where Swea is located, Swea Hong Kong is the most important network, which is a great help-perhaps most of the time in Hong Kong, but also later when you are wondering about something and need help by someone who has previously mentioned or has information about what can be done,” she continued..

Also socially the organisation plays an important role, with many different activities being held, including some popular recurring events, such as hiking and my ‘My Hong Kong’ (where the members take turn to guide in various parts of the city).

“There are many hiking trails around Hong Kong with stunning scenery and it’s a fun way to see different parts of Hong Kong and the surrounding areas.”

Swea collaborates with other local Swedish organisations, such as the General Consulate, Swedcham, the Swedish Church and the Swedish School, holding regular meetings. “We also arrange a welcome event together every fall for new Swedes arriving to Hong Kong.”

Swea Hong Kong is also engaged in the celebration of Swedish festivals.

Singapore also has a high turnover of members, currently 150-170, of whom some are on their first foreign posting.

“No one has been in the Board longer than two years in recent times. Therefore, we are now trying to put together a few simpler templates so that you can easily pick up when someone new comes along,” reported Anna Seefeldt “An introductory document will make it easier for new people to jump on a position without having a handover. There is a lot of information about SWEA that can easily be lost otherwise.”

They are also working on having a local photo archive for reuse in the future, and to have an “exciting archive for future anniversaries”.

In general Swea Singapore enjoys strong support from Swedes in Singapore and different companies. Within Team Sweden they have regular meetings to stay informed.

“We are well respected and usually have the greatest impact when it comes to sharing information with the Swedes in the country.”

They also produce their own magazine to be proud of: “It is a lifestyle magazine that, apart from our members, is distributed to different places where we share our experiences and tips to other Swedes in the country or who are on their way.” Their donation group is also working hard to set up a scholarship for approval at their next annual meeting in February 2019. It is planned to be a language scholarship, valid for a certain place in Sweden.

The programme for the coming year will be very special, as Swea will celebrate 40 years as an organisation in 2019.

30 March will be the kickoff for this anniversary year. On 11 May the biggest 40 Years celebration takes place when Swea members worldwide gathers.

Following on that a private anniversary trip to Sicily takes place during 22-29 May. And during the summer period in Sweden a trip to the Bjäre peninsula will take place on 2-5 July. On 9 August a half-day conference will be held at Clarion Hotel Sign, in Stockholm.

The celebrations culminate during 14-17 November, with the world meeting in Dubai as the grand finale for the anniversary.

The regional meeting in Bangkok also had the famous Swedish actor Kjell Berqvist, because of his Swedish family’s charity work and educational efforts in Thailand. Kjell Bergqvist, supported by his family presented how they started a swimming school and how it has expanded, including setting up a proper, registered ‘stiftelse’ foundation back in Sweden called ‘Familjen Bergqvist Insamlingsstiftelse’. This foundation received a donation from Swea.

”The regional meeting went extremely well, and we have had marvellous feedback on the post-vent survey,” Swea Bangkok President Anna Frummerin told ScandAsia.