Three Tibet associations in Denmark participated in the People’s Climate March on Sunday, October 30, 2022 leading up to the Danish national elections 2022. They were Students for a Free Tibet – Denmark, Tibet Support Committee in Denmark and the Danish Tibetan Cultural Society.

“We participated to draw attention to Tibet’s climate crisis,” explains Tine Banggaard Steffensen from  Students for a Free Tibet – Denmark.

“China’s dams and diversion of water have major consequences for Tibet and the rest of Asia. The consequences are a global crisis,” Tine Banggaard adds.

“We carried signs and a messages about China’s unregulated mines in Tibet and the terrible consequences for the environment and the Tibetan nomads who are displaced. Lithium, which is used for e.g. electric cars and mobile phones, is also extracted in Tibet by China, with major environmental consequences.”

In a wider contest, the Tibetan associations participating in the demonstration also wanted Denmark to stop importing solar cells made in Uyghur labor camps in Xinjang in China. Their signs read: BAN SOLAR CELLS MADE BY SLAVE LABOR IN XINJANG, CHINA. STOP CHINA’S UYGHUR PRISON CAMPS!

Tibet have glaciers that melt 3 times faster than anywhere else on earth and melting permafrost areas that emit large amounts of CO2.

“Tibetan climate activists in Tibet risk imprisonment, torture and even death when they demonstrate against the Chinese rule and theirs in Tibet, so we need to stand up for them,” Tine Banggaard mentions.

The march started from the Danish parliament located in Christiansborg castle, towards Stormgade, over the bridges over the canal and back to Christiansborg. The total march was about 3 km long and ended with a performance by Jada, a Danish singer, and a speech by the organizers who also mentioned China’s mega dams and their importance for India, Pakistan, Bangladesh and the Mekong River countries.

“Students for a Free Tibet Denmark spoke to many people who were very interested. We also spoke to a Chinese man who had taken quite a few photos of us,” says Tine Banggaard.

“The conversation was calm. The chairman of SFT told him about Tibet’s climate crisis and he could understand melting glaciers due to global warming was a problem. But when talking about China’s dams, mines and prison camps in Xinjiang, he said nothing. He did admit, that he liked the CCP,” she added. 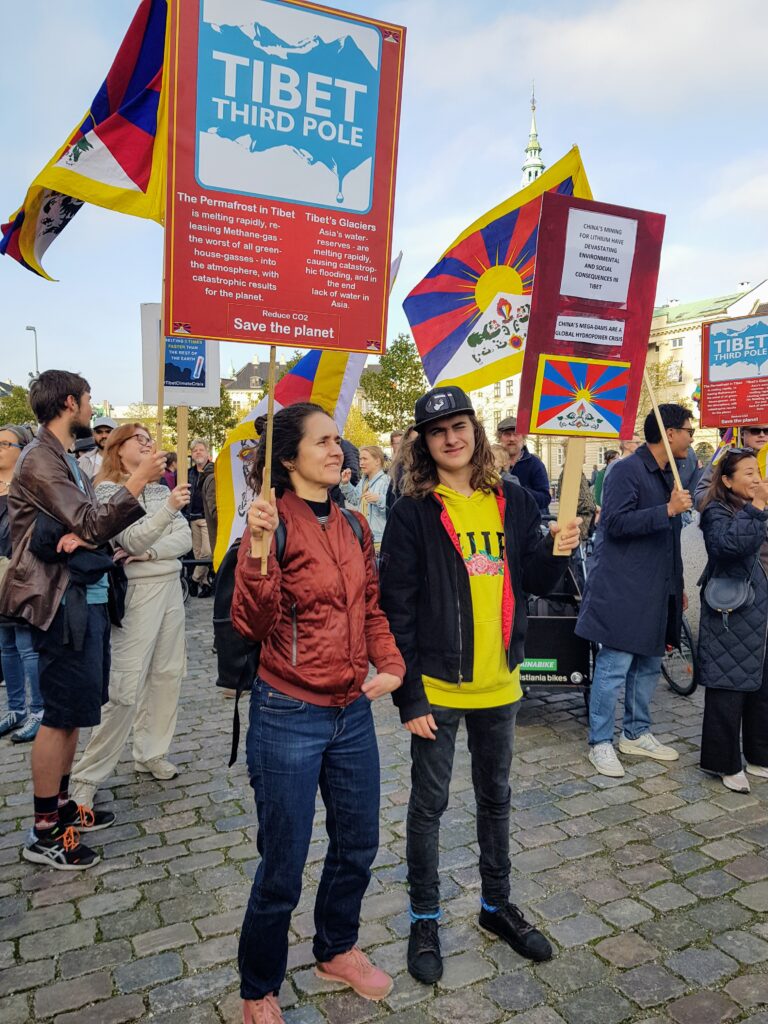