Tommy Franssila, Director – Culinary Operations, who was previously a familiar Nordic face at Grand Hyatt in Kuala Lumpur is since May 2018 based at Hyatt Regency Danang Resort & Spa – in a leisure-focused setting. Tommy therefore constitutes our best possible guide to get a grip on what this destination called Danang has to offer holiday-makers.

Today this Vietnamese seaside city is accessible directly from many cities in Southeast Asia and even further away – South Koreans being its number one visitor group, for instance.

“Danang receives 400 inbound flights per week to the city. It’s a busy airport. There are lots of visitors from Asia in general but we also see those from other countries such as from Europe, Australia and the US. Previously it wasn’t the most popular destination here; Hoi An Ancient Town was – especially among Western as well as Asian travellers, because it’s a Unesco heritage city and a travel destination in that sense,” says Tommy as we meet for lunch at Pool House.

Hoi An is situated only 25 minutes from the Hyatt hotel, which is situated on an expansive beachfront land in southern Danang, so an excursion there is easily organised with the hotel. “It’s worth visiting, especially at night time. There’s a lot of lantern fabrication in the area so they display a lot of that at night and it becomes very idyllic,” suggests the Finnish-Swede.

He describes Danang as a bit calmer than a big city.

“There’s a bit less shopping etc. but on the other hand it’s quite calming, in the sense that it’s not as hectic as a big city. People come here for leisure so they’re a little bit more relaxed. In more business-oriented hotels people are more in a hurry, whereas here they come to wind down and enjoy. And that’s the kind of environment that we’re trying to create for the guests and of course that reflects on you as well.”

With that Tommy means that the staff is influenced by the slightly more leisurely atmosphere among the guests, even though they of course still work long days and are busy.

“Hyatt Regency Danang Resort is a beach resort where we want people to enjoy the good food and beverages, our spa and hopefully also good weather, so they might also come back another time. We have a lot of returning guests coming here annually, some even several times per year.”

The resort is a bit outside Danang proper, which does have a downtown, but which is still relatively dominated by low-rise buildings. Among the waterfront high-rise hotels are lining up, though Hyatt, situated further southeast is a low-rise property. To define the Regency among the different Hyatt brands Tommy says that it consists in many resorts but also city hotels around the world.

“Its characteristics are more towards a family-oriented hotel rather than a typical business hotel where Grand Hyatt is more business hotels and our Park Hyatt hotels are more boutique style; with butler service etc. Any ranges of our brands, depending on the location where they are, also typically cater for that segment of business where you are located.”

A lot of construction is visibly also going on and Tommy confirms that there are a lot more hotels coming up, with hopes of course also for more tourist arrivals. If one wants to visit when it is less crowded, high season, that starts end of May and ends towards early October, as well as Tết (the Vietnamese New Year), should be avoided.

More shopping centres are anticipated but what people shop mostly in Danang is locally produced clothing and accessories, such as straw handbags.

“Danang is also very famous for its marble deposits, where Marble Mountain with lots of marble factories is a popular excursion near to the hotel.”

Regency Club, the hotel’s club lounge, boasts an enormous marble slab which functions as a table for the breakfast spread and canapés served to guests in the evening.

Tommy introduces the remaining outlets in the five-star resort. Greenhouse, the-all-day-dining whose main fare is Mediterranean cuisine, is also decked out with marble. “We do our own home made pastas, pizzas and so forth; comfort food. That’s our western food offer.” 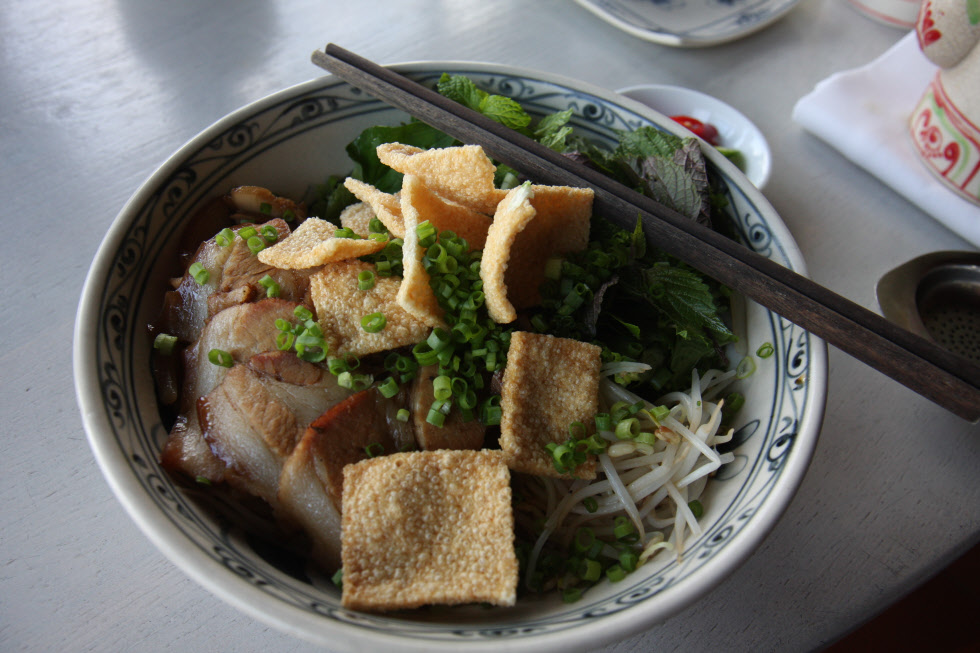 Pool House sits next to the Non Nuoc Beach. “Here we serve authentic local dishes and western comfort food paired with some delicious desserts, so you have your typical noodle dishes, and some stir-fried items that are popular throughout this region. The dish Cao lầu is prepared with hand-crafted smoked Noodles from our neighbouring town, Hoi An. It’s served with roasted pork belly, local fresh herbs, rice crackers, at the bottom of the bowl there is a soy-based, sweet pork broth sauce with local spices. The smoked noodles are a traditional noodle only found in Hoi An and its only prepared by two families today.”

“At Pool House, we have a weekly local market evening, serving more street food-like dishes offered at different stations. So, you can have the experience of local food here at the resort,” continues Tommy.

“Beach House is our evening dining restaurant, where we focus on Vietnamese cuisine, mainly seafood, a little bit refined but with an authentic taste. We serve steaks as well as to satisfy all guests’ tastes. On Fridays we offer a barbeque dinner there. Each restaurant has a buffet theme night actually.”

As part of the hotel there are also residences so the European-style eatery Baguette functions both as convenience store and café. “Baguette is a great stop for Vietnamese coffee and it stocks traditional Vietnamese grocery products and hard-to-find Western items for expats and tourists so they can cook their own meals.”

Being in charge for the whole F&B operation Tommy describes his job as follows: “My role is to help and support teams. Sometimes it is more about administration than being in the operations but sometimes it’s the opposite. You provide five-star service to guests by working with the team, being on the floor etc.; helping and ensuring that the guest get everything that they expect to experience when they are visiting us.”

This means that Scandinavian visitors can most definitely get to see this outgoing Nordic chef and have a chat with him too. 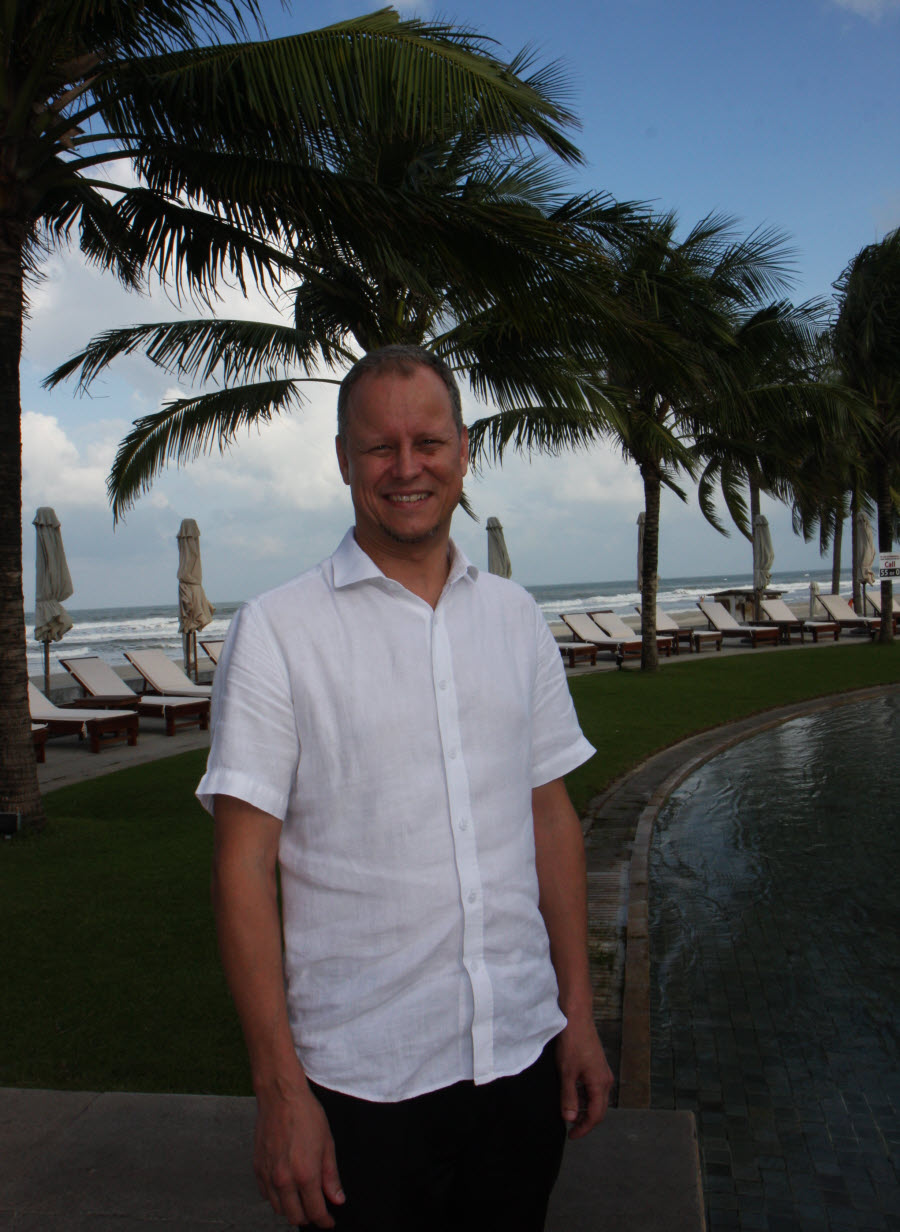 When asked to compare Vietnamese cuisine with Malaysian cuisine Tommy responds: “The cuisine is in general quite light and not very heavy, in comparison to Malaysian food where they use a lot of coconut milk, coconut cream etc and heavy curries. Here they use lots of vegetables, salads and herbs in their dishes. Usually when you eat street food you can enjoy many things as the portions are quite small. You don’t overwhelm yourselves. And as in many countries in Asia at lot of the food is made for sharing, which is a great way of enjoying a meal, and try even more dishes,” he adds.

The vegetables are to a large extent organic and sourced locally, Tommy highlights. “We work with many local farmers. The majority of our fruits and vegetables are organic – we actually try to work towards a 100 percent target of organic produce and we’re nearly there.”

Among the organic farmers that can supply all year around is one run by nuns: “They have an organic farm tied to their school, so since the opening of the hotel, we’ve been buying their produce. Now they’ve been able to grow their production so there are other hotels that are buying their produce as well. But I believe we were the first hotel customer. We have helped and guided them on what kind of herbs and vegetables we would like.”

Seafood is also sourced locally as much as possible; from the local fishing boats. “We try to make sure we use sustainable seafood,” he adds.

A slider with the ID of 63 doesn't exist.