In the evening on the 16th of November, SWEA Bangkok Professional, gathered together for an evening  at our president Eva Steinbach’s home at Baan Kapi.

This evening we had the great pleasure to meet the new Deputy Head (second man) in this case woman, to the Swedish ambassador H.E. Mr. Jon Åström Gröndal, Mrs. Anna Jakenberg Brinck.

Anna arrived to Bangkok about 4 months ago together with her two children. This woman has an impressive CV (Curriculum Vitae). She has been working for the Swedish embassy in Harare , the capital of Zimbabwe, during the years 2004-2006 and in Geneva at the Permanent Mission of Sweden during 2011 to 2015. Before she arrived to Bangkok, she was at the Ministry of Foreign Affairs in Stockholm, Sweden.

The evening started with Eva Steinbach giving a brief introduction of SWEA and Pojanath Bhatanacharoen, executive Director at SWEDCHAM as well as in charge of SWEA Professional, saying a few words to welcome Mrs. Anna Jakenberg Brinck. We were served a delicious salad made at Mamma’s Kök and white or red wine. During the dinner, we discussed several topics and many of us interrupted Anna, asking questions during her presentation. We for instance didn’t know that staff from the embassy frequently attend judicial trials here. Since Anna hasn’t been  very long in Bangkok, she hasn’t had time to travel much  yet, but she told us she had been to Hua Hin. She hopes to be able to see as much as possible of this fascinating country. She admitted that there are certain things going on in Thailand, that she does not yet understand, but she hopes to acquire a deeper understanding in the near future.

I think we all agree , she is not the only one questioning certain things. Thailand surprises all of us sometimes. Mrs. Helena Gröndal Rietz, the wife of ambassador Jon, was one of us 13 SWEOR this evening. She is an ambassador herself and at SWEA Bangkok’s last Annual meeting, we had the pleasure to listen to her interesting story. 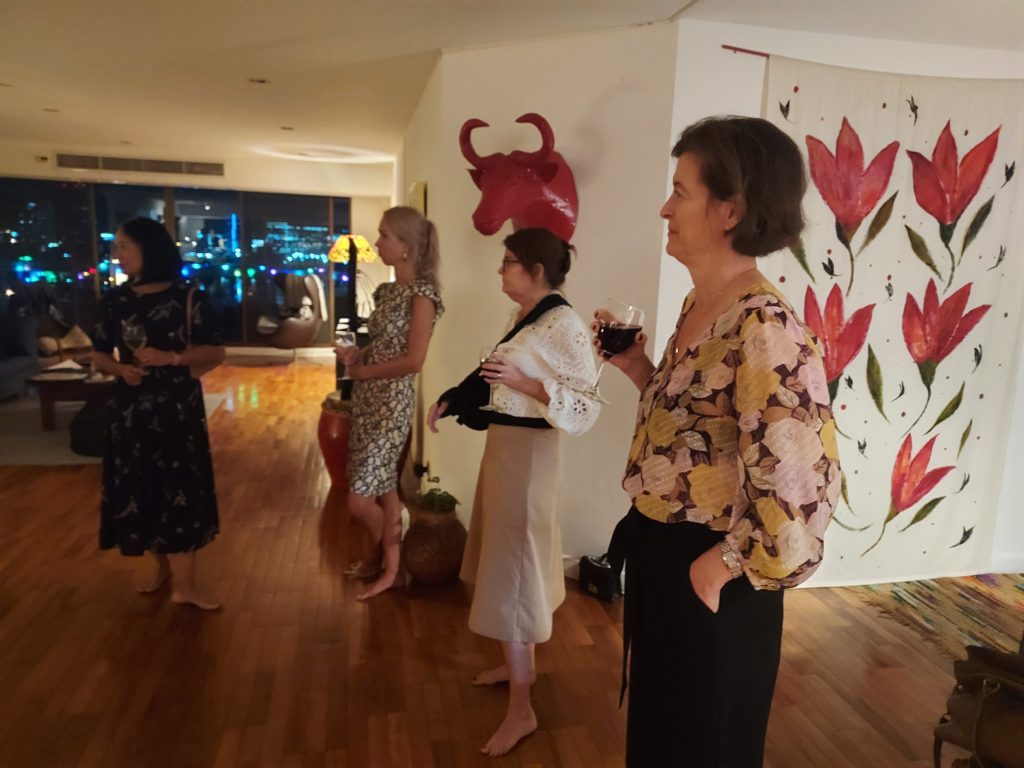 It was a very relaxed and nice evening and if you are not yet a member of SWEA Bangkok, do come and join us. The program group organizes a lot of fun events both daytime and evenings. SWEA Professional is a sub division to SWEA Bangkok with focus on business women.

SWEA cooperates with SWEDCHAM, the Swedish School Organization in Bangkok and the Swedish Church, currently hibernating. SWEA said thank you to Anna with our apron and grill glove!