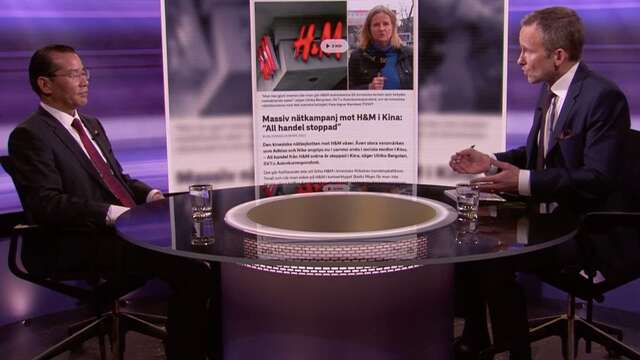 During the latest episode of Swedish television STV’s program “30 minutes”, Chinese Ambassador Gui Congyou denies the existence of the so-called concentration camps in Xinjiang. According to a recent article published by Swedish media Expressen, Amnesty Sweden however rejects the ambassador’s statement.

The Chinese authorities’ oppression of Muslim minority groups, mainly the Uighur people in Xinjiang province has come under heavy international criticism in recent years. It is reported that hundreds of thousands of people have been detained in retraining camps, in many cases without having committed any crimes.

During the episode, the Ambassador however stated that there are no so-called concentration camps in Xinjiang. “What is available is help with education for those who are affected by terrorism and those who have committed minor terrorist crimes, to help them with professional skills so that they can get a permanent job and enter society,” the Ambassador said.

Gui Congyou further claimed that no one has been in these camps for over a year. “Just over a year ago, all these people finished their education, got a job, and came back to society. It has been significant in eradicating the source of extremism and terrorism, he said.

According to Expressen, Ami Hedenborg, press spokesperson for Amnesty Sweden, rejects the ambassador’s statement that the camps are closed down. To Expressen, she says, “We do not know how many are in the camps, but we know that the human rights violations and the persecution of Uighurs continue. These camps exist and are fully operational.”

During the episode of “30 minutes” the Ambassador stated that it is completely free for journalists who want to examine the conditions in Xinjiang themselves. Host Anders Holmberg noted that a team from SVT recently was not allowed to operate freely at all, they were constantly followed by police and instructed on who they could interview.