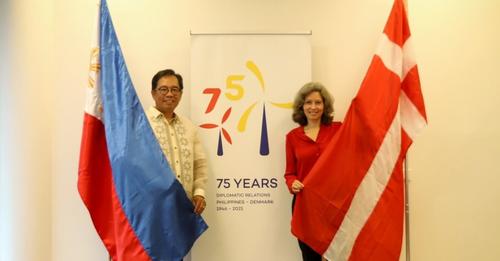 Denmark and the Philippines remain committed as partners for sustainable growth and in a recent Rappler interview, Ambassadors Grete Sillasen and Leo Herrera-Lim talk about how both countries work together to fight the climate crisis.

Philippine Ambassador to Denmark Leo Herrera-Lim is impressed with Denmark’s climate change goals. Denmark is one of the few countries in the world that have committed to becoming carbon neutral by 2050, passing a law in 2020 that seeks to slash its emissions by 70% in 2030 compared to 1990. “I think that’s the most ambitious goal in the world,” Ambassador Leo Herrera-Lim says.

The Philippines is amongst the most vulnerable countries to be impacted by a warmer planet and Ambassador Leo Herrera-Lim hopes that Denmark’s experience in fighting climate change and moving away from fossil fuels, as well as other non-renewable energy sources, is transferred to the Philippines.

Ambassador Leo Herrera-Lim adds that Denmark and the Philippines’ track record in partnering on climate solutions and sustainable growth has become the “core of our aspiration.”

Danish Ambassador Grete Sillasen says Danish companies are keen to both present their experiences in implementing greener solutions and extend their expertise in the area to the country. “They don’t have to be convinced to come here, they are here already,” she says.