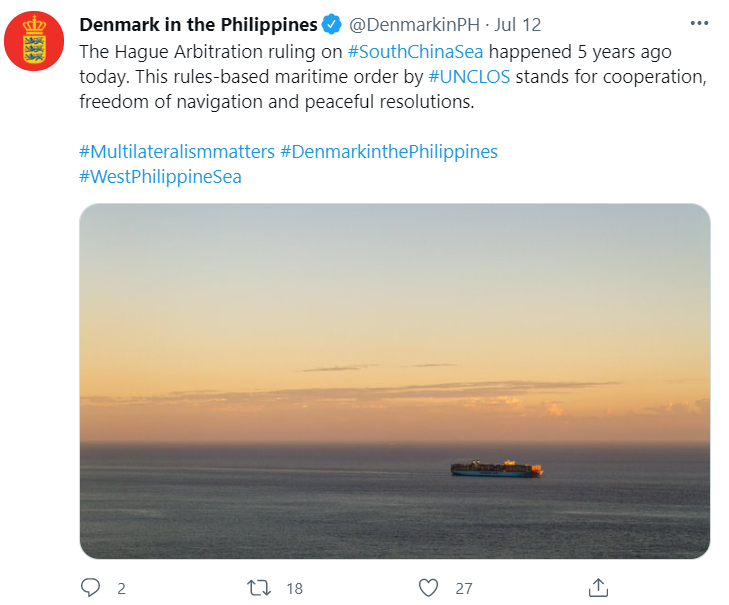 Denmark, Japan, European Union, the United States, and Canada were amongst countries across the world that on 12 July celebrated the fifth anniversary of the Philippines’ arbitral award, the news site Rappler writes.

The arbitral award is the 2016 ruling by the Permanent Court of Arbitration (PCA) that affirmed Filipinos’ rights in the West Philippine Sea or the South China Sea where the disputed Spratly Islands are located.

The Hague ruling, which the Philippines won against Beijing, declared there was no legal basis for China’s expansive claims in the South China Sea, a vital international trade route and after years of downplaying its own award the Philippines finally renewed its commitment to the ruling last year and called on China to follow it.

In a Tweet, the Embassy of Denmark in the Philippines marked the celebration by stating, “The Hague Arbitration ruling on the South China Sea happened 5 years ago today. This rules-based maritime order by UNCLOS stands for cooperation, freedom of navigation, and peaceful resolutions.”

The European Union also celebrated the ruling by Tweeting, “What happens in the South China Sea matters to the EU, ASEAN, and the whole world. We further reaffirmed the importance of maintaining and promoting peace, security, stability, safety, and the right of freedom of navigation in and overflight above the South China Sea, as well as the peaceful resolution of disputes, in accordance with international law, in particular, UNCLOS”