For Swedish people the name Björn Frantzen is wellknown. Björn was born in Solna, just outside Stockholm, on January 26th 1977. He was married in 2016 to Sara Sandberg and the couple has two daughters. Björn has gone from being a dedicated football player (he played for AIK beteween 1992-1996) to become a successful Chef running several Michelin stars restaurants.

“I was forced to quit football, as I had a congenital problem with my heart,” Björn explains.

How come he decided to become a Chef?

Well, he remembers a dinner he had at an age of 12, a perfect steak with French fries and Sauce Bearnaise, that dinner changed his life and made him interested in the world of excellent and well prepared food. In fact Björn says, he could have started anything, it just had to be something creative. His mum is a talented artist and paints. No one in his family is specially interested in the gastronomy.

Björn attended a cooking school in Stockholm during three years and also cooked for the military in Boden during a year.

His cooking style is contemporary. He has a CV that anyone would be proud of, just to mention a few places he has worked at; the Two-Michelin-starred restaurants Le Manoir aux Quat’Season in the UK and the Three-Michelin starred restaurant L’Aperge in Paris, both restaurants specialized in classic French cuisine. There is no special Chef who has inspired him.

In 2008 he opened, with his business partner Lindberg, the Frantzen/Lindberg restaurant outside Stockholm, which took on the Nordic cuisine and went from glory to glory and attained one Michelin star to soon be followed by one more.

In 2013, the restaurant was renamed Frantzen  and moved to central Stockholm in 2016. This year, Björn Frantzen was one of three restaurants bestoved with the coveted three Michelin stars in Michelin Guide Nordic Countries 2018.

He also runs some more restaurants in Stockholm and Asia. He had a Michelin stars restaurant in Hong Kong, but was forced to close it down due to the Covid situation.

One of todays most popular restaurants in Stockholm is his “Brasserie Astoria”. This restaurant is located downtown  and it’s an old, renovated famous cinema building,  Biograf Astoria.

Astoria is a more basic restaurant, a brasserie with different prices compared to the Michelin restaurants and serving a la carte.

“My wish is that Astoria shall give the guests an international feeling, like a lounge at a New Yorker hotel. It must be a warm and cozy place” Björn says. 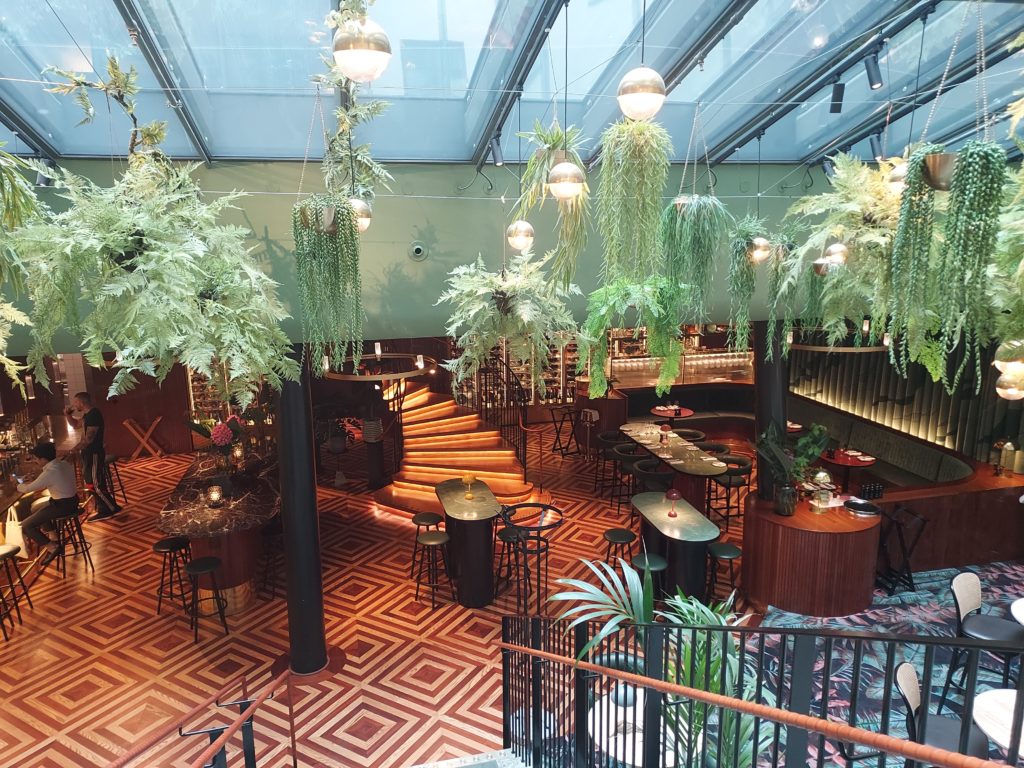 The building is from 1928 and has been renovated and well conserved. Here you will find a huge abstract outstanding wall painting by the artist Olle Hagdahl to lay your eyes on. In the old cinema salon is today a huge bar there you can drop in for a drink and a bite from the special bar menu. From the bar leads a magnificient Hollywood- like stair up to the dining room. It is a spacious dining room that can seat up to 100 guests and an open kitchen. If you prefer to dine in privacy, there are several “Chambre separee” and also a wine bar facing the bussling street. The menu includes classic French bistro dishes and Björn is very accurate while picking the ingredients. Swedish summer truffle on the menu during summertime and winter truffle during the cold months of the year, just an example.

On the 2nd of June2022 , Björn opened the restaurant VILLA FRANTZEN BANGKOK for a media pre-view. This restaurant offers a Dine-In experience as well as food for take away. The restaurant is located in a beautiful park and the villa itself is magnificent. It has been a privat residence, but is now totally changed to accomodate the bar and restaurant. 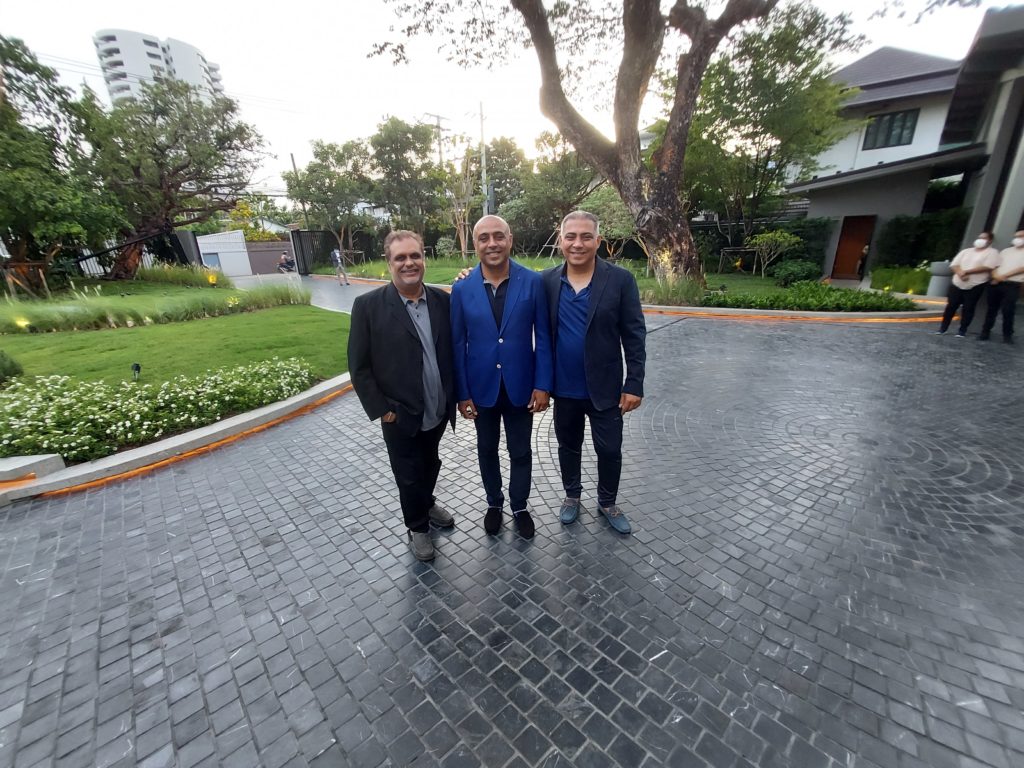 The property belongs to five men and Björn holds a long time leasing. The design is cool Nordic.

“It is a different design/decor from e.g. ZEN in Singapore. Villa Frantzen Bangkok is more cool, than cozy and it suits the hectic life of the Bangkok inhabitants. Here you come to relax and to escape the busy life”,  Björn explains. All his restaurants are decorated by three Swedish, young women who runs the “Joyn Design Studio” in Stockholm. The owners say “We are an interior architectural studio with one great ambition: to put people in the right mood. Through deep understanding of the specific culture of the location, the guests and staff and their patterns of behavior, we reach understanding.” 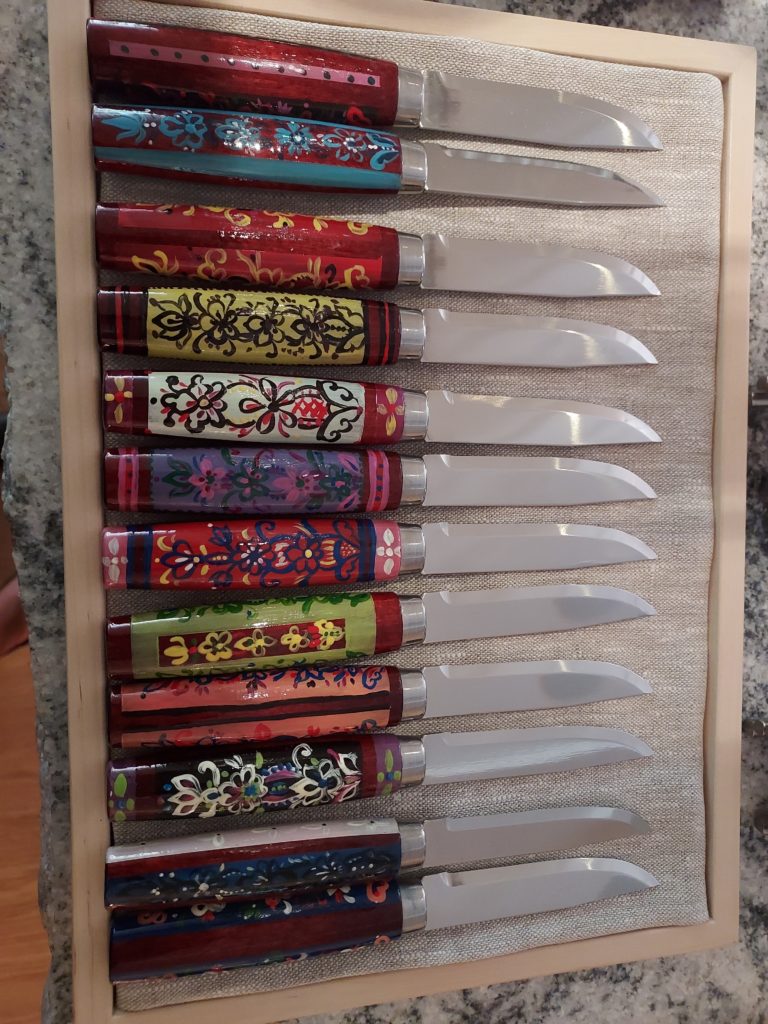 By asking Chef Björn if he is going to import most of the products from Sweden, he answers:

“Of course, we will import products from Sweden that don’t get damaged by travelling, but we will also add thai ingredients of course. The menu will include a choice of fusion dishes, Swedish/Thai. The Swedes will be happy to find dishes with one of the most popular Swedish cheese “Västerbottenost” and löjrom (Whitefish roe) and even  spruce shoots (granskott) is an ingredient in some dishes. 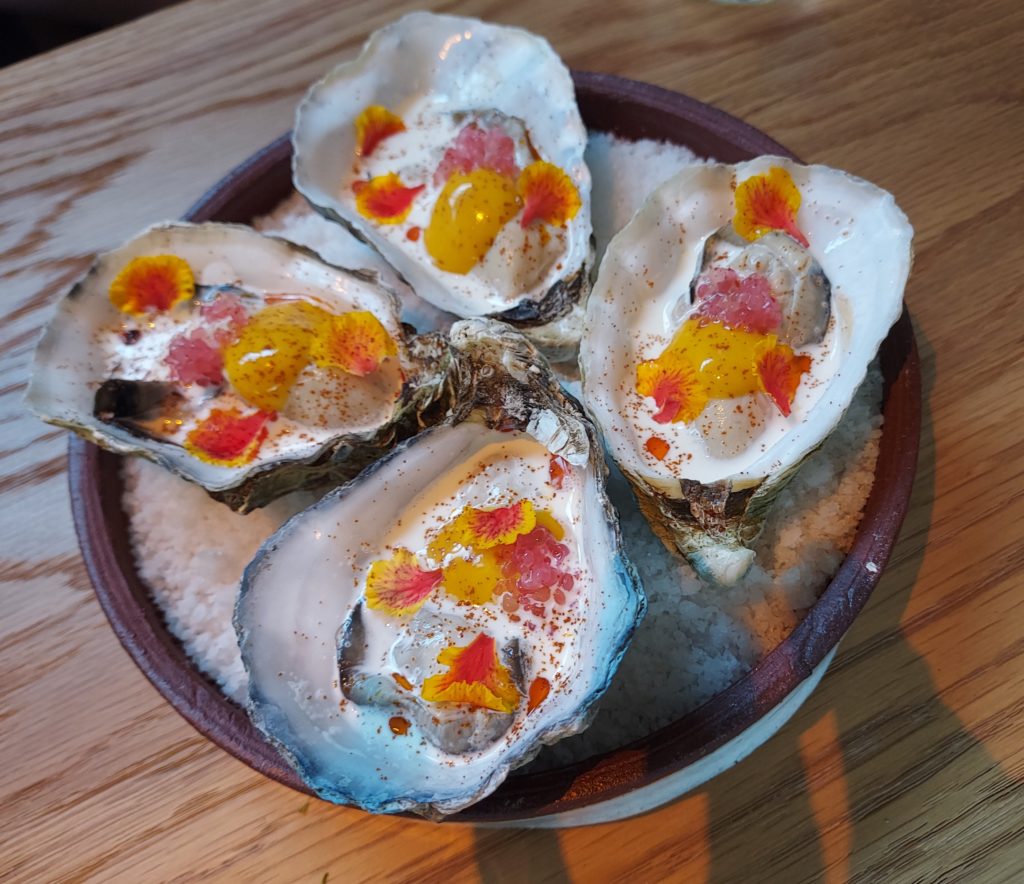 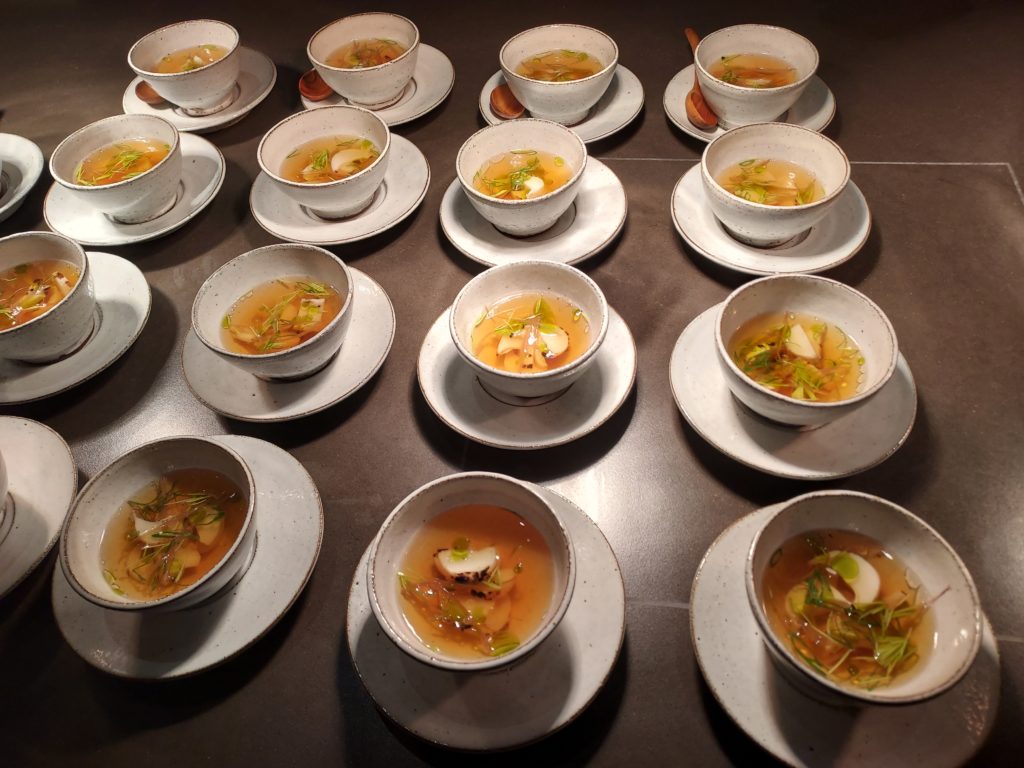 The tasting menu is divided into five parts and in every part, you have three dishes to choose from. “We will try to follow the Nordic seasons”, Björn explains.

You can choose to dine in the main restaurant with its open, ultra modern kitchen, or more casual in the bar. There are also several Room separees and one with a huge terrace and a spacious restroom. In the park there is one, romantic spot for two, a perfect place to sit and enjoy a glass of wine or one of all very fancy cocktails mixed by Mr. Gabriel. We, the media, were offered, except great wines and sparkling, a very special cocktail made of gin, vineager and with a taste of smoke and forrest, not sweet at all. There are plenty of cocktails, with very Nordic ingredients on the drinking list. 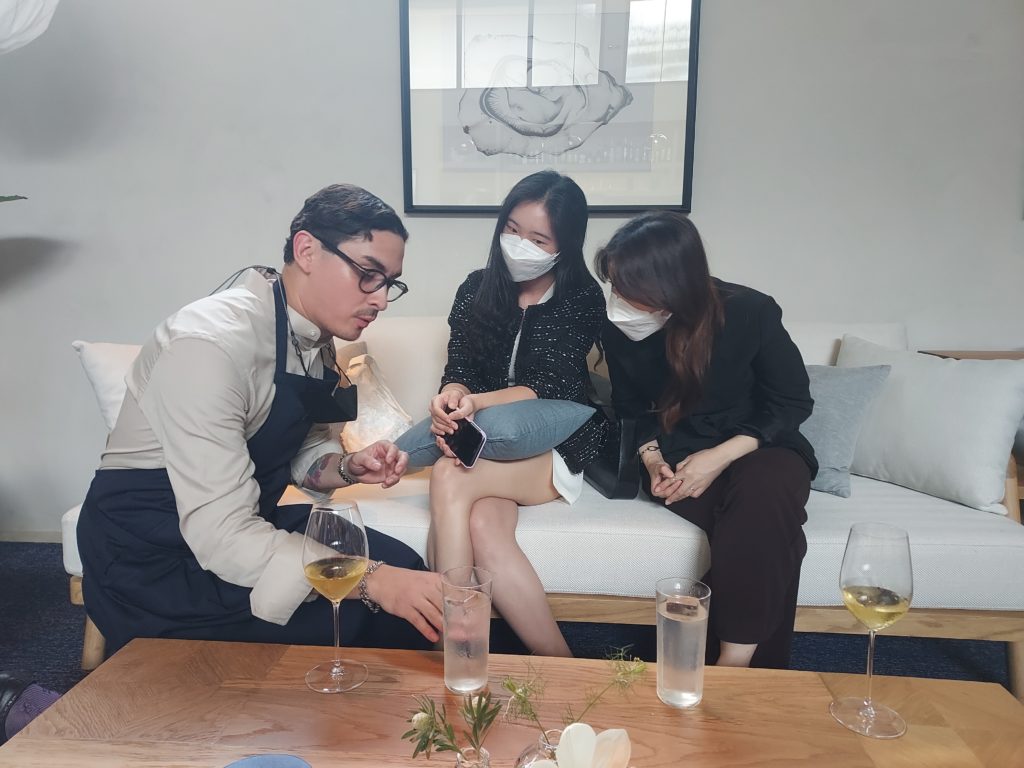 I have no doubt, that this Nordic restaurant will become a popular place to dine at in Bangkok. From June the 5th you can book your table. Do it, just because you are worth it!

The staff will take good care of you and there will be 6 Swedes among the staff working, all great and dedicated to their job. The Chef himself will come on an regularly basis, but he trusts his staff and is convinced his team will be doing a fantastic job, with or without him.