During a week in February, I had the pleasure to host 2 young, Danish girls in my home, Sabrina May Elmhoff and Thea Lunde Högh.  Both have  choosen to take a gap year after school to do what they seem to like the most, gymnastic on a very high level.

Since October 2021 they have been travelling  to several countries, like Germany, Poland, Dubai, Argentina, Uruguay and Thailand together with 26 other boys and girls and 5 coaches. Currently, they are in Thailand, waiting to see if they get visas for Indonesia. Due to Covid, this elite group hasn’t been able to perform for audience as much as they would have loved to.

I sat down with both girls one evening to find out a little about themselves, their upbringing, dreams etc.

Let me start with Sabrina. I noticed, from the first sight, that Sabrina looks Asian, but not Thai.  She explained, that she at the age of 3 months, was adopted by Danish parents. She was born in Vietnam, but until today she has not been able to visit her birth country, but she knows her biological parents/family.

Sabrina has been interested in dance since ealy years and thought she had signed up for a dance class, but realised it was a rythmical gymnastic class. “I got so surprised, I wanted to do something new and fun  like dancing, but quickly I found out that gymnastic suited me very well.”

To become a part of The Danish National Perfromance Team, you have to do an audition, as there are only 28 young people who become the chance to join. “I was one of the lucky ones.” Sabrina has been practicing gymnastic 2-3 times a week since she was 15.

The team has already been in Thailand since  December 23rd 2021. I was curious to find out what the girls think about their stay in the Land of Smiles and Sabrina says, “Thailand is such a friendly country.” She has been visiting Thailand before. She’s fascinated by the lifestyle here, as it is so different from back home in Denmark. She thinks here is always something to explore, so many exciting things.

“It’s a bit hard to communicate with the people as the language is difficult. I can’t think of anything I dislike here. We have had time to see a lot of Bangkok and the huge shopping malls are impressing, we don’t have anything similar in Denmark.” They have been to temples, The Royal Palace, China Town, trying out street food (without getting sick) and they have seen several schools. During their stay at my place, I could hear them early in the mornings in the kitchen, preparing a healthy, rich breakfast. Their omelettes looked delicious. During daytime they trained at NIST Soi 15, but they never seemed too tired to explore the bussling Bangkok life in the late afternoons and evenings.

Due to the Covid situation, they have unfortunately not been able to perform for audience as much as they would have liked, but they have had small shows and many workshops, all successfull.

When they return to Denmark, there will not be much time for them to relax, a last years a tour within Denmark will start already in March and later on, another Europe tour will take place. Sabrina is aware of that she might not be able to do gymnastic on this level for ever, but she is realistic and says, “When we will do it at another level, we will, for sure keep on with it.”

I also asked if Sabrina had a goal she wants to reach, but she answered, “I just want to wake up and be happy every day, to discover new things and explore more of the world.”  I also wanted to know if there was anything special from this tour that she will remember for a long time. “Yes, one of our shows in Argentina was special, the audience could come for free and see our performance, but they were asked to bring some long lasting food for the less priviledged people. I think that was such a great gesture.”

So what about Thea? She was born and raised in a small town called Ikast, in the middle of Jutland. Her gymnastic career started at a very early age when she and her mum joined a gymnastic team together. “I was only 2 years old and I loved it from the very first beginning.”

Thea explains that their biggest focus is, to get the world moving, to teach people a healthy lifestyle, practice fun games and activities. She and Sabrina met the first time in May 2021. During a few weekends they started practicing and they kept training together the whole summer before the World tour  started in the autum last year. For Thea this is the first time in Asia, but absolutely not the last she says. Like Sabrina, she finds the lifestyle, traditions and culture in Thailand fascinating. She wants to take many more gap years, to discover new places before she starts at an University. She thinks she will be able to do elite gymnstic for many more years, as she can’t live without it. “I need the movements and the pleasure I get from it.” 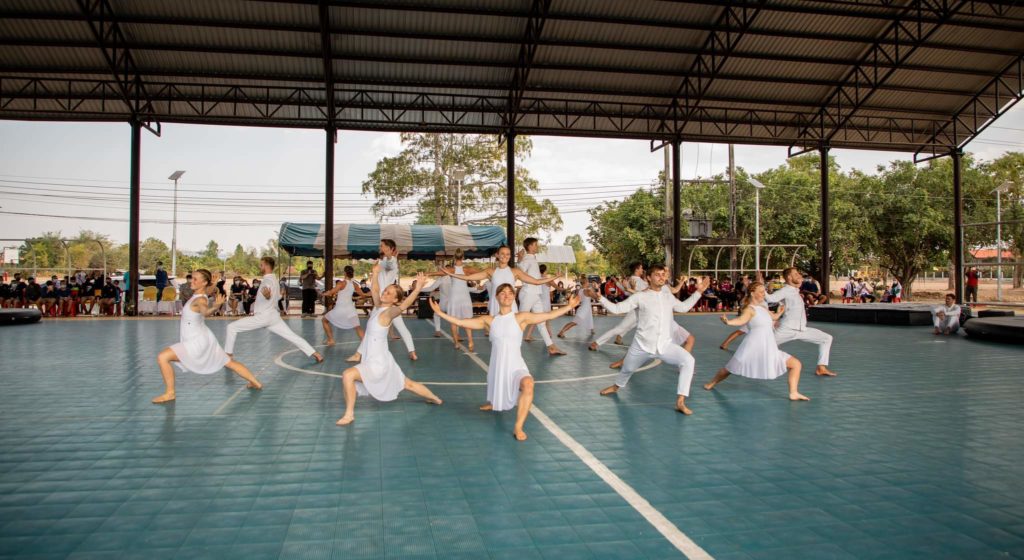 Thea’s best memory so far, is from the training camp in Sakon Nakhon. “We, as a team, had such a good time and our workshops with the students were fantastic. The facilities were totally different from what we are used to, it was as well, an experience. People were so kind to us.”

It became very calm here when the girls left me. They were lovely to have around, fun, helpful and polite. I do hope I will have the opportunity to see them again one day. Until then, I wish them good luck. Hopefully they will be able to finish the tour in Indonesia. Danish Gymnastics Team in top shape before shows in Bangkok