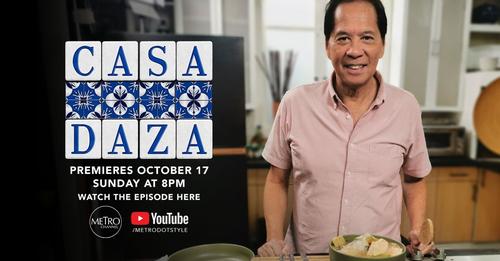 The Norwegian Embassy in Manila has teamed up with Metro Channel in producing a three-part special featuring Norway’s trademark seafood treasures to be showcased in the show “Casa Daza” premiering on 17 October.

For its first episode, host and expert Filipino chef Sandy Daza will be showing viewers four easy, under 30-minute recipes using one of his favorite ingredients—the Norwegian Atlantic Salmon.

Learn how to make the most out of every single delectable part of the blast-frozen fish starting with its fillet as the culinary master cooks Salmon Tonkatsu. He will also shed light on how to make Salmon Head Tom Yum and Salmon Head Curry using the head and bony parts of the fish. Lastly, Chef Sandy will prepare Salmon Belly Teriyaki with the Norwegian Atlantic Salmon’s belly as the recipe’s chief component.

Known as a seafood nation, Norway is a small country in Northern Europe that ranks as the second-largest seafood exporter in the world. The country also prides itself in being recognized for its sustainable management of its ocean resources.